The Venetian Festival ends after 33 years in St. Joseph 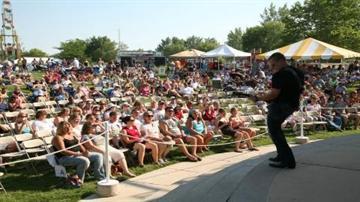 ST. JOSEPH, Mich. - It is the end of the road for the Venetian Festival along Lake Michigan.

Members of the committee for the Venetian Festival met behind closed doors Monday night at the Holiday Inn Express in St. Joe where the decision was made.

According to sources close to the Venetian Festival a decision was not expected at the meeting Monday night. It was a meeting to vent, discuss options and see where they go from here.

"It is a very sad night for us," President of the Venetian Festival, Laurie Damper said after the meeting.

Damper said that everyone went into the meeting open minded and optimistic about moving forward but once finances were discussed the mood quickly changed.

A source told ABC 57 News that "amounting debt" added to the decision.

Surveys were sent out in August to the businesses community and residents in the town asking what their thoughts were about the festival. 2/3 of those surveys came back saying, thanks, but no thanks to the festival.

Those I spoke with Monday night said the festival had just grown too big for the town, parking was an issue, getting around was a problem. Many said they just wanted the festival to end.

Once the city got the results of the surveys earlier this month they pulled city service support and law enforcement protection.

Damper said that money wasn't given by the city for the festival in the past but manpower was. Damper estimated that the services they offered equaled about $23,000.

When asked if the decision was final Damper replied, "It is as far as we are concerned."

Although if a financial contribution or a change in heart by the city were to be made she said they would discuss it.

The Venetian Festival draws in a crowd of more than 100,000 people during the four days it's put on. The festival includes food, a car show, carnival, fireworks and live music.

"They wanted to go out with a bang, it was a very good year this year," said a source Monday evening after the decision was made.

According to Draper the city wanted to move in a different direction for future festivals, restricting how many days it would be held, not allowing roads to be blocked off downtown.

The city also asked for the Festival to be smaller in scope and size, those demands added to the lack in city support lead to the decision to retire the festival.

This statement was posted on the Venetian Festival Facebook page Monday night right after the decision was made:

"Fans, friends and neighbors: After many weeks of meetings and discussions, the Venetian Festival on the St. Joseph River has decided to discontinue and dissolve. A multitude of financial and logistical issues with the Festival have made it extremely difficult for us to continue. An official statement/press release will be posted here from the President as it becomes available. Thank you."

The Facebook status had more than 100 comments by early Tuesday morning. Many people expressing sadness over the end of the festival.

Damper said that it cost about $325,000 to put on the festival each year. A cost that they just can't continue to support.

There was also discussion about moving the festival to another town but that decision was eventually shot down.

Stay with ABC 57 News as we continue to cover this developing story.