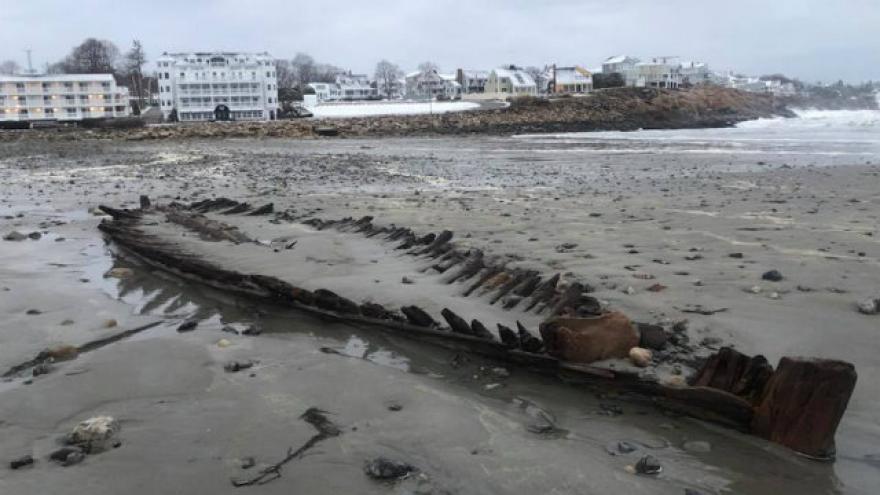 (CNN) -- The powerful storm that battered the Northeast over the weekend also uncovered the wreckage of a ship that could date back to the Revolutionary War.

The wreckage was found on a beach in York, Maine. The police department in the southern Maine city posted photos of the ship on its Facebook page.

"Locals were there all morning with cameras," York resident Becca Dugas told CNN.

She says the wreck is well known around town, but she had never seen it.

Local historian Sharon Cummins says the wreck was first spotted in 1958, but was quickly reclaimed by the sands.

It reappears occasionally after a strong storm.

Leith Smith, an archaeologist with the Maine Historic Preservation Commission, says the ship is believed to have been a coastal trading vessel, known as a pink, that was used between 1750 and 1850.

He says recent research suggests the wreckage may have been from a ship called "The Industry," which dates back to 1769.

"It was probably driven on shore by a storm and pushed so far on the sand that they couldn't refloat it again," he said.

It was common, in those days, for locals to strip wood and anything else of value from grounded ships after their owners salvaged the cargo.

The remaining skeleton is about 51 feet long and 14 feet wide.

Smith says the ship will probably be visible for a month or so before it returns to the sand. Researchers plan to do some drone mapping and do more tests on the wreckage to get a better of idea of how old it is.

The shipwreck isn't the only piece of early American history affected by the storm.

A tree that was given to George Washington and planted at Mount Vernon in 1791 snapped on Friday.

Rob Shenk works at Mount Vernon and told CNN that the Canadian Hemlock snapped about two-fifths of the way up its trunk.

The tree was given to Washington by General Lincoln of Massachusetts.

They also lost a cedar tree near the tombs, Shenk said.