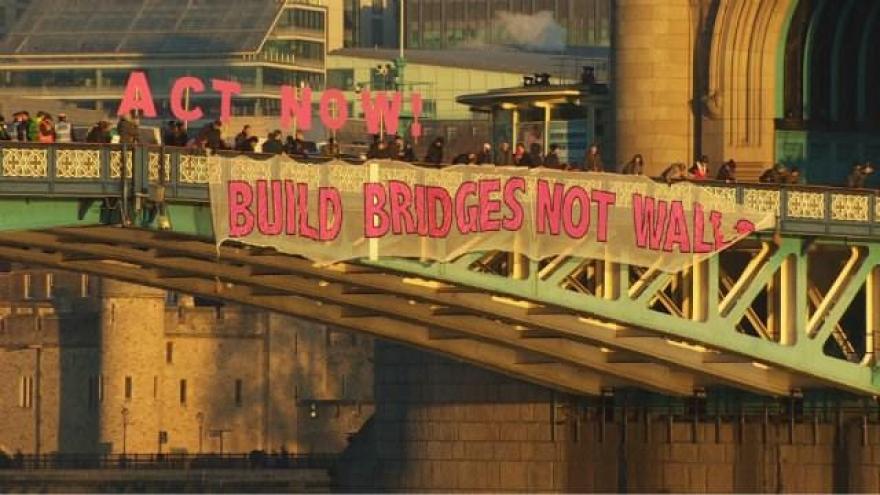 (CNN) -- On the streets, in small gatherings and in the halls of government, people around the globe weighed in on US President Donald Trump's inauguration Friday, anticipating how the real estate tycoon's policies may play out on the world stage. Here is some of the reaction -- including opposition, support and even indifference:

A Women's March in Brussels elicited criticism of Trump's offensive comments about women and alleged cases of sexual harassment. The demonstration drew participants from a range of countries, including Norway and Spain.

Katrine Steinfeld, a Norwegian-Hungarian who works for gender equality in Brussels, said she fears that Trump's election will legitimize the ill treatment of women.

"It's crazy that this man can lead a country and assault women," said Steinfeld.

"His behavior creates legitimacy for attitudes that is not appropriate and that is a threat for women," she added.

Rebecca, who did not give her last name, was critical of Trump, but expressed cautiously optimism.

"I came because I don't want Trump to be the new normal," said Rebecca, a Spaniard residing in Brussels. "It's a threat for moral and human rights. I'm not against him. I'm against what he says."

"We need to watch and see what he will do," she added. "I give him credit and I will wait and see, but I fear it would be bad."

Granma, the official communist party newspaper, ran articles Friday on birth statistics, the end of the baseball season and a new, experimental strain of cigar tobacco, but made no mention of Trump's swearing-in.

During the presidential campaign, Trump pledged to reverse Obama's historic opening with Cuba if Havana didn't make concessions on human rights and religious freedom. Privately, Cuban officials have said they are waiting to see if Trump's action will match his rhetoric and so far have avoided criticizing him.

A wary China watched one of its toughest critics assume the presidency Friday, marking the start of what could be a more contentious bilateral relationship between the world's two largest economies.

"We would like to join hands with the new US administration to uphold the principles of non-confrontation, non-conflict, mutual respect and win-win cooperation," Chunying said.

During his inauguration address, Trump took a populist tone, saying, "We must protect our borders from the ravages of other countries making our products, stealing our companies, and destroying our jobs."

Though he didn't mention China by name, he has vowed to be tougher on the country by renegotiating trade agreements and has even proposed imposing tariffs on Chinese imports.

State-run communist media did not shy away from criticizing Trump last year, calling the then-candidate a "clown" and "big-mouthed." But tabloid-style newspaper Global Times wrote in a Friday editorial, "A favorable Sino-US relationship represents great progress in human political civilization, and it is hoped that Trump will consolidate this trend."

Trump received a warm congratulations from India's prime minister and minister for information and broadcasting.

There was little love for Trump at the Grand Mosalla, a complex of religious halls and other facilities in Tehran, as people gathered for their usual fiery Friday prayers, CNN's Fred Pleitgen reports. Instead, they ripped the US for its policies toward Iran and its role in Syria.

"It makes no difference which president is in power," a young man wearing a scarf depicting Iran's Supreme Leader Ayatollah Ali Khamenei told CNN. "Whoever is in power will have that same outlook on Iran, which is a pity."

The main topic on the minds of many of those in attendance was the future of the nuclear agreement between Iran, the US and other nations, aimed at curbing Iran's nuclear ambitions in return for sanctions relief.

Trump has called the agreement a bad deal, and said he wants to renegotiate it. Iran's government has rejected that idea, and Iranian President Hassan Rouhani has insisted that one man cannot repeal the deal or change its terms.

Even before Trump's inauguration, Prime Minister Benjamin Netanyahu sent him a welcome tweet.

"Congrats to my friend President Trump. Look fwd to working closely with you to make the alliance between Israel&USA stronger than ever."

Netanyahu has made it exceedingly clear that he's ready to work with Trump, especially as the relationship with President Obama deteriorated rapidly in its final weeks, CNN's Oren Liebermann reports.

Israeli leaders are already expecting Trump to follow through on one of his biggest campaign promises -- to move the US Embassy from Tel Aviv to Jerusalem and recognize Jerusalem as the capital of Israel.

Israel's ambassador to the UN, Danny Danon, said shortly after Trump's inauguration: "We look forward to your visit to Jerusalem, the capital of Israel."

Jerusalem's Mayor, Nir Barkat, even launched a campaign just before the inauguration, calling on Trump to move the embassy.

Scores of people -- mostly American expatriates, but also a few Japanese citizens -- marched in Tokyo on Friday evening to highlight what they say needs to be fought for during Trump's presidency. The event was organized by the group Democrats Abroad of Japan.

"I just want to make sure that Trump knows that we are here," event organizer Erica Summers said. "Women are not going anywhere. I want to make sure we have our reproductive rights. I want him to know we (women) are equal, and he cannot get rid of us."

About 550 miles to the southwest, a few hours before the inauguration, a few dozen Japanese conservatives enjoyed a celebration of the new American president at a restaurant in the city of Fukuoka.

Since the swearing-in would be happening too late for their gathering, diners watched Election Night footage on a big screen.

"Trump is such an honest, outspoken person who has the same way of political thinking as us," event organizer Yoko Mada said.

"What conservatives in Japan have been wanting is to bring this nation out of the so-called post-war regime, and one symbolic thing would be us owning our own military again, which Trump supports."

In a letter, Abe reflected on their November "candid exchange of views" at Trump's home in New York.

"I look forward to working hands in hands with you to ensure peace and prosperity of the Asia-Pacific region and to address various challenges the international community faces," Abe said.

President Enrique Peña Nieto tweeted nearly two hours after Trump's address, congratulating the new leader and expressing a desire to strengthen the relationship between the countries.

Former President Vicente Fox wasn't nearly as gracious. An outspoken critic of Trump's pledge to have Mexico pay for a border wall, the former head of state kept up his long-running taunting of Trump.

During Trump's address, Fox tweeted: "Speaking of allegiance, Trump? Speaking of greatness? America was already great and succesful, then you happened!"

And: "Prosperity comes in compassion and friendship. We will thrive, we will be succesful. Let the US lock themselves up!"

Earlier in the morning, Fox tweeted this: "Today we turn into an era of uncertainty. If Donald the Unready doesn't learn to behave, the rest of the world needs to come together."

Mexican Sen. Armando Rios Piter had some choice words for Trump: "Happiness is a good thing to work on and Mexico and the United States should be working in that way -- not in the way that Donald Trump has been talking."

Trump's address did little to calm tensions or improve his reputation among protesters in Mexico City. The roundabout marked by Mexico's Angel of Independence was surrounded by protesters calling Trump a fascist, racist and xenophobe. Carrying signs that said "Make America human again" and "Love trumps hate," protesters chanted "Get out Trump."

Juan Carlos Guerrero wore a souvenir T-shirt from Barack Obama's first presidential inauguration and asked two things of Trump: respect and a change in tone on NAFTA, the free-trade agreement Trump has threatened to eliminate to keep US jobs from moving to Mexico.

Marquis Staples traveled to Mexico City from Wisconsin to make sure Mexicans know there is opposition to Trump in the United States. Holding a sign that read "F*ck Trump," Staples said Mexicans appreciated his presence, giving him thumbs up, high fives and honking their horns at his sign.

Palestinian leaders offered few -- if any -- statements after the inauguration, but their primary concern echoed the mood on the streets.

Thursday, thousands of Palestinians demonstrated across the West Bank, protesting the potential move of the US Embassy to Jerusalem. Demonstrators held up pictures of Trump and waved Palestinian flags.

Well before dawn in the United States, about 200 people marched Friday against Trump in the Philippines' capital, Manila, Reuters reported.

Demonstrators burned a mock, paper US flag before lighting an actual one. Chants included: "US troops out now!"

"Filipinos from Manila to Washington to New York are joining protest actions against what they believe to be ... a fascist and racist regime, and now the chief representative of US imperialism," Renato Reyes Jr., secretary-general of the Philippines' left-wing New Patriotic Alliance, told Reuters.

People also held signs with messages such as "Donald Trump, pullout US troops in the PH!" and "Fight Trump. Resist fascism and imperialism."

The new American president drew a message of congratulations from the UK's foreign minister around the time of the inauguration speech.

Earlier in the day, a UK-based protest group used signs and bridges across the country to convey a less celebratory message.

The group unfurled an 80-foot banner reading "Bridges Not Walls" on the iconic Tower Bridge over London's River Thames on Friday morning -- one of more than 150 such strips that the group planned to display on bridges across the country.

Similar banners or signs were displayed on some of London's other spans, including Waterloo Bridge and Blackfriars Bridge.

The group, Bridges Not Walls, said it was showing support for people it believes stand to be marginalized under a Trump administration.

"On Trump's inauguration day we're taking action to show our support for groups under attack -- here in the UK, across Europe and in the USA -- and to reject the rise of a dangerous and divisive far right politics," a message from representative Nona Hurkmans says on the group's website.

Meanwhile, drinks flowed as some Republican US expatriates and like-minded Brits cheered Trump at an inauguration viewing party at the Royal Overseas League in central London, organized by Republicans Overseas UK.

"It gives me great confidence in our democracy," the group's chair, Malise Sundstrom, said. "I think in my lifetime I won't see a transition of power like this. A change like this. It's really exciting to see."

Gloria Martin looked like a proud American, wearing a red, white and blue sash while speaking with a crisp, British accent.

"I'm a Londoner and I love him," she said. "I think it's a movement now going across the whole of the Western world. We don't want to be represented anymore by politicians who do not listen to their voters."

Pope Francis is praying for Trump, the pontiff told the new president in a letter Friday.

"Upon your inauguration as the forty-fifth President of the United States of America, I offer you my cordial good wishes and the assurance of my prayers that Almighty God will grant you wisdom and strength in the exercise of your high office," Francis wrote, according to the Vatican.

"At a time when our human family is beset by grave humanitarian crises demanding farsighted and united political responses, I pray that your decisions will be guided by the rich spiritual and ethical values that have shaped the history of the American people and your nation's commitment to the advancement of human dignity and freedom worldwide.

"Under your leadership, may America's stature continue to be measured above all by its concern for the poor, the outcast and those in need who, like Lazarus, stand before our door.

"With these sentiments, I ask the Lord to grant you and your family, and all the beloved American people, his blessings of peace, concord and every material and spiritual prosperity."