These are the NFL players protesting today amid Trump criticism 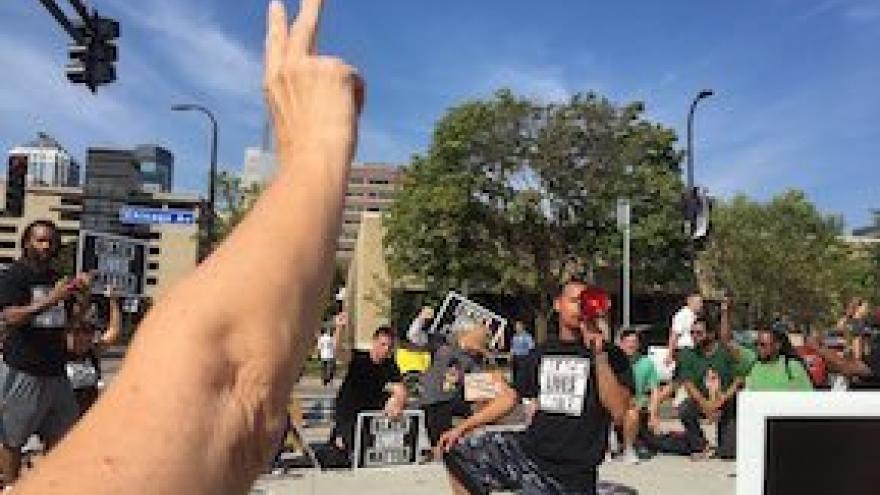 (CNN) -- Rather than taking a knee, most NFL players opted for a show of unity Sunday, locking arms ahead of their games amid criticism from President Trump who slammed players opting to protest during the national anthem.

Still, plenty opted to kneel during "The Star-Spangled Banner," with the Baltimore Ravens' Terrell Suggs and Tampa Bay Buccaneers' Mike Evans among the stars following the lead of former pro quarterback Colin Kaepernick, who pioneered the anthem protests last year over what he was said was social and racial injustice.

Ahead of the morning game in London and 1 p.m. ET games, players from several teams, including the New England Patriots, Jacksonville Jaguars, Cleveland Browns, the Denver Broncos and the Miami Dolphins, took knees during the anthem. With the exception of one player, the Pittsburgh Steelers didn't even take the field until the anthem was over. The Seattle Seahawks and Tennessee Titans also did not take the field for the national anthem in Nashville.

In Sunday morning tweets, Trump renewed his criticism of the protests, slamming the league's ratings and saying players should be fired or suspended for such protests. On Saturday, he called for NFL owners to fire any "son of a bitch" who "disrespects our flag."

"What you just saw was a variety of responses with the theme of unity," an NFL front office source told CNN. "All across the league, owners, coaches and players came together to decide what was best for them."

The source added, "If Trump thought he could divide the NFL, he was wrong."

Here's who's been taking a stand Sunday:

A number of Chargers players stood with their arms interlocked and other sat. Some Chiefs players knelt, including linebacker Justin Houston who knelt towards the players bench

"I believe in honoring the American flag and supporting all of those who sacrifices protect the many freedoms we have in this country, including the right to have differences of opinion," Chiefs Chairman and CEO Clark Hunt said in a statement.

The Seattle Seahawks and Tennessee Titans remained in their locker rooms during the national anthem before their game.

"The players jointly decided this was the best course of action. Our commitment to the military and our community is resolute and the absence of our team for the national anthem shouldn't be misconstrued as unpatriotic," the Titans organization said in a statement.

The Seahawks said the team made the decision together.

"We will not stand for the injustice that has plagued people of color in this country. Out of love for our country and in honor of the sacrifices made on our behalf, we unite to oppose those that would deny our most basic freedoms," the Seahawks players said in the statement.

Titans cheerleaders were seen standing on the sidelines with hands over their hearts, like many fans in the stands.

Meghan Linsey, a Nashville singer and runner-up on NBC's The Voice," sang the national anthem. On the last note, Linsey and her guitarist took a knee.

Several Browns players locked arms. Some stood, while others knelt on the sideline. Colts players were also locked arm-in-arm while they stood or took a knee.

Several Saints players sat on the bench or knelt while others stood. Panthers starting quarterback Cam Newton and his teammates stood during the anthem.

There was swift reaction to the actions of some Saints players. A restaurant in Chalmette, Louisiana, near New Orleans, refused to show the Saints game on television.

"Some of our local players chose to sit during the National Anthem, which will not be supported or praised at WOW," WOW Cafe & Wingery of St. Bernard wrote on its Facebook page.

Five-time Pro Bowl selection Von Miller was among several Broncos players who knelt on the sidelines, while Garett Bolles and Virgil Green stood with their fists in the air.

Multiple Buffalo Bills players stood with arms around each other on the field while some players knelt with their arms interlocked. Some of those who stood held the shoulders of other players.

Bills running back LeSean McCoy stretched during the national anthem, according to a video from CNN affiliate WKBW.

"I can't stand and support something where our leader of this country ... is acting like a jerk, angry and upset about NFL players protesting in a peaceful manner," McCoy said after the game, WKBW reported.

While most players from both teams, Tom Brady among them, opted to lock arms, more than a dozen Patriots -- including running back James White, wide receiver Brandin Cooks and Pro Bowl cornerback Stephon Gilmore -- took knees.

In the owner's suite above them, Patriots owner Robert Kraft stood with his hand over his heart.

On the Dolphins sideline, wide receiver Jarvis Landry stood during the anthem but locked arms with safety Maurice Smith and tight end Julius Thomas, both of whom knelt.

As Eagles safety Malcolm Jenkins tweeted before the game, Philadelphia players locked their arms in unity. As a retired African-American serviceman, Petty Officer 1st Class Generald Wilson, belted out the anthem, Eagles CEO Jeff Lurie joined the team, locking arms with Jenkins on the sideline. Linebacker Mychal Kendricks opted not to join his team and stood off to the side during the anthem.

"Having spoken with our players, I can attest to the great respect they have for the national anthem and all it represents," Lurie wrote. "We ... firmly believe that in this difficult time of division and conflict, it is more important than ever for football to be a great unifier."

Team owners Arthur Blank of the Falcons and Martha Firestone Ford of the Lions joined their teams on the sidelines, locking arms with their players. Starting running back Ameer Abdullah was among at least eight LIons players taking a knee during the anthem.

Detroit singer Rico Lavelle closed out his rendition of the anthem by taking a knee and holding his microphone aloft in his fist.

While both teams locked arms along the sidelines, Buccaneers star wide receiver Mike Evans and his counterpart DeSean Jackson knelt with their hands over their hearts. Coach Dirk Kover stood with his hand over his heart. The crowd applauded once "The Star-Spangled Banner" concluded.

As coach Mike Tomlin promised, the Steelers didn't take the field for the national anthem. But offensive lineman Alejandro Villanueva, a former captain in the Army and ex-Ranger who did three tours in Afghanistan, stood in the tunnel, hand over heart, as the anthem played.

Tomlin had said before the game his squad would remain in the locker room.

Six-time Pro Bowler and Super Bowl champ Suggs was atop the list of Ravens players taking a knee before the game in London. Alongside him was retired Ravens legend Lewis, who locked arms with wide receiver Mike Wallace and linebacker C.J. Mosley.

Other coaches and players locked arms during the anthem.

At least a dozen Jaguars took knees during the anthem, including defensive standouts Calais Campbell and Jalen Ramsey, as well as their No. 4 draft pick, running back Leonard Fournette.

The majority of players locked arms, as did the coaching staff and Pakistani-American team owner Shad Khan, who said in a statement that he met with team captains prior to the game to express his support.

"Our team and the National Football League reflects our nation, with diversity coming in many forms -- race, faith, our views and our goals," he said. "We have a lot of work to do, and we can do it, but the comments by the President make it harder. That's why it was important for us, and personally for me, to show the world that even if we may differ at times, we can and should be united in the effort to become better as people and a nation."