These crumbling textbooks show why Oklahoma teachers are walking out 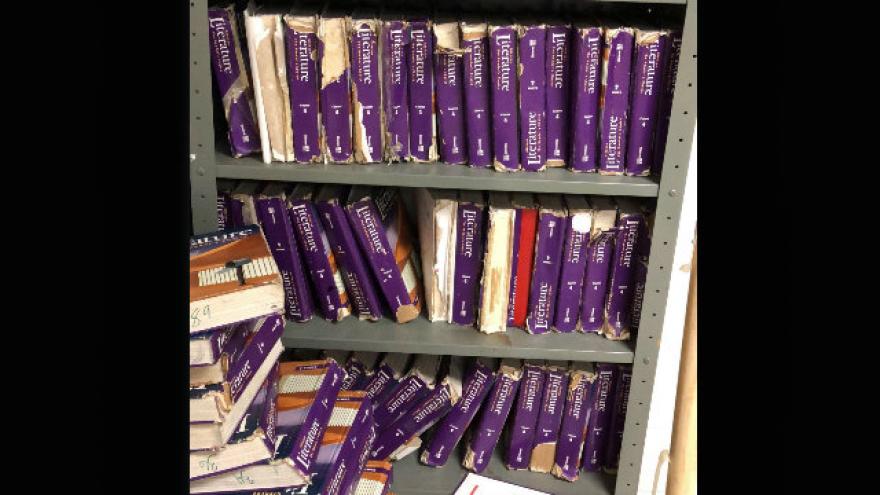 (CNN) -- As an English teacher at Heavener High School in eastern Oklahoma, Sarah Jane Scarberry said she has tried for years to replace her classroom's tattered textbooks.

"I have requested new textbooks for a few years with no real hopes of getting any," she told CNN.

Scarberry is one of several teachers and parents in Oklahoma who have shared photos and stories via social media of crumbling, outdated textbooks as part of their plea for more education funding. Some are posted on the "Oklahoma Teacher Walkout -- The Time Is Now!" Facebook page. 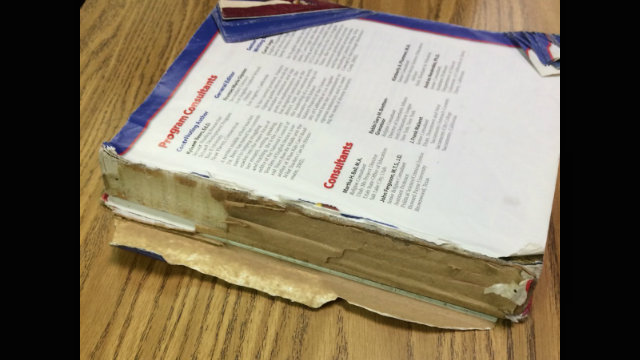 Twitter user jamiebh73 shared this photo of a textbook in her 8th Grade daughter's history class. She says it's a history book and the current President in it is George W. Bush. jamiebh73/Twitter

The state of the textbooks go a long way toward explaining why thousands of teachers in Oklahoma left their classrooms and rallied at the state capital on Monday and Tuesday, asking for teacher and support staff raises, as well as better funding for their schools and students.

Scarberry also shared images of her classroom's broken desks and chairs, and said they weren't too bad compared to other classrooms.

"As for the desks, I'm more fortunate than most I guess. My husband works with me at Heavener and works in maintenance. He usually can use salvageable parts from discarded desks to keep me going," she told CNN.

On Twitter, user jamiebh73 shared a photo of a textbook from her daughter's eighth-grade history class in Owasso. In the book, George W. Bush is still president, she said. 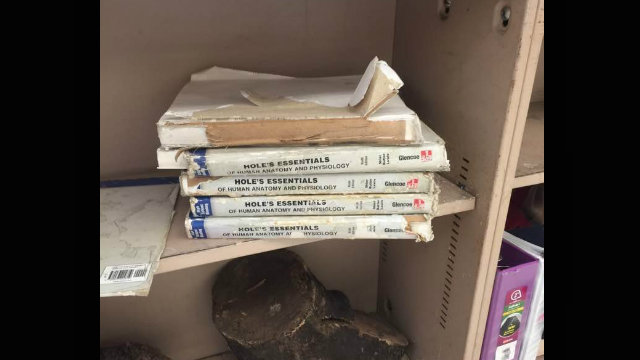 Teacher Mary Burton shared this picture of the anatomy books her students have to use at Eisenhower High School in Lawton, Oklahoma. Mary Burton/Facebook

Mary Burton, a high school science teacher at Eisenhower High School in Lawton, posted an image to Facebook of the textbooks used in her anatomy class.

"I don't have enough and the ones left are in terrible shape," she said.

Last year, her class's 25 anatomy books were shared by about 70 students, Burton said.

"Because graduation requirements changed, I only have one section of human anatomy, so there are enough books for my students for the first year in a long time," she said.

Teacher Emily Ozment took this picture of the biology textbooks some teachers are using at Eisenhower High School. She said the copyright for the books date to 2004 and they have been in use since 2005.

"The majority of my students were 3 years old when these were adopted. Some of them were born in 2004, making the books literally as old as them," she said.

Education funding has dropped by 28% over the past decade, the state teachers' union said. Oklahoma is among the bottom three states in terms of teachers' salaries.

Last week, Gov. Mary Fallin signed a bill that gives an average of $6,100 raises for teachers, $1,250 raises for support staff, and adds $50 million in education funding.

But Oklahoma Education Association President Alicia Priest said that still is not enough. Some classrooms don't have enough textbooks, and some of those books are more than 20 years old, she said.

The $50 million increase in funding from the state "will buy less than one textbook per student in Oklahoma," she said.

"Our schools just can't maintain all of the supplies, instructional materials, textbooks, even copy paper," she said. "Copies are limited in schools to maybe 30 a week."

In a statement, Fallin praised last week's pay raise and said legislators are only able to do what the budget allows.

"We must be responsible not to neglect other areas of need in the state such as corrections and health and human services as we continue to consider additional education funding measures," she said.

'It's always the cuts' 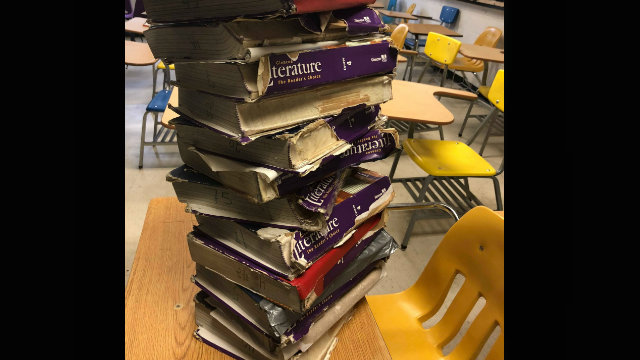 Allyson Kubat, who teaches at Mustang High Scool, just southwest of Oklahoma City, said the textbooks student in her public speaking class use are so old that they advise them to ask librarians about "this new thing called the Internet" and explain how to use microfiche.

"I need new textbooks. I'm not the only one," she told CNN's Wolf Blitzer on Monday.

Scarberry said that the walkout was needed to get the state's attention about the difficult conditions in their schools.

"We are told at the beginning of every year how much our budget will be cut. It's never, 'Well teachers, now is the time to stock up because we have a budget increase.' It's always the cuts," she said.

Her school has even discussed moving to a four-day week to cut back on expenses such as electricity and water usage.

"I feel the walkout was a necessary event to get our state's attention. It may work, it may not, but at least people are finally aware of the daily struggle," she said. "Our class sizes increase every year and we don't have the funds to hire new teachers or aides. Teachers are using their own paychecks to keep stretching resources.

"I could go on for days about the things we need, and the opportunities my students deserve. For myself, a raise sounds great, but this walkout for me was never about that. It was always funding for our schools," she said.