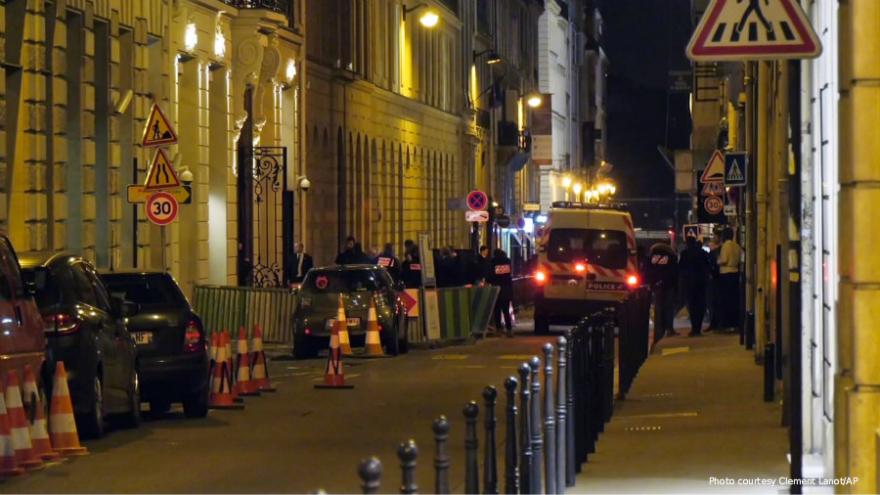 (CNN) -- Thieves armed with axes stole at least 4 million euros ($4.8 million) worth of jewels from a shop inside the Ritz Hotel in central Paris, according to French police.

The five men, who were wearing hoods, entered the lobby of the famous hotel on the Place Vendome at around 6.30 p.m. local time (12.30 p.m. ET) Wednesday, before a nearby police patrol intercepted the gang.

Niki Lazar, a 21-year-old woman from Chicago, told CNN that she was having a drink with her parents in the Ritz's Hemingway Bar when she saw a man wearing a ski mask run into the hotel.

"(He) ran right from the back door of the bar to the front, right past my father. He had an ax in his hand," she said. "Immediately the bartender closed and locked the door and (corralled) everyone to the back kitchen area of the bar."

Along with shouts and screams from outside the room, Lazar said they heard "at least 10 rounds of gunfire" before taking cover behind the bar, where they remained hidden for several minutes.

She also said she saw one of the bartenders "being tended to by a paramedic."

Police entered from the rear of the hotel and were able to arrest three of the robbers, firing at them with electric Taser-syle stun guns as they apprehended them.

The two other men escaped with the jewels, French police told CNN. Authorities couldn't confirm if they got away with everything that they attempted to steal.

One of the fleeing robbers hit a pedestrian with his scooter. The passerby was not hospitalized. The three suspects who were apprehended by police at the scene were in their twenties.

Wine merchant Edouard Margain posted a photo of the crime scene that he took from his office on social media.

"Just saw a guy arrested while trying to take the street on the wrong way on a scooter, then dozens of cops in the street and medicals in just a few minutes after," Margain told CNN.

It was the second major jewel heist in a major European city in a week.

Last week thieves made a daytime heist of valuable jewels from the Qatari royal collection at an exhibition in Venice, Italy. Local officials said the jewels were of "indisputably elevated value."

That robbery occurred at the Doge's Palace, a popular tourist spot in Venice, where the selection of Indian jewelry was on display to the public. One suspect may have acted as a lookout while the other grabbed the jewels from a display case, police said.

The stolen items included a pair of earrings and a brooch made of diamonds, gold and platinum.

Another Paris heist that likewise can be placed in the brazen category involved Kim Kardashian West. In October 2016, she was robbed at gunpoint inside her room at a luxury private mansion by a gang of men disguised as police officers. They made off with an estimated $10 million in cash and jewelry.