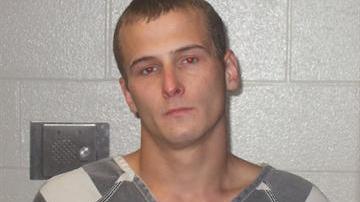 Sgt. Tony Slocum with the Indiana State Police told ABC 57 News that Bell was hiding out at a friends house in Monterey, IN. It got back to someone else that he was at the house either by phone or social media and police were contacted.

Bell was arrested at the home at 2 p.m. According to Slocum he was not armed and offered no resistance at the time of his arrest.

Bell was arrested on charges of murder, burglary and robbery.

Bell was one of three men wanted by police in connection to the murder of Wilma Upsall, 81 of Rochester.

William Scroggs, 25, of Delong, and Jason Miller, 34, of Plymouth were both arrested after a police chase through Starke and Marshall Counties Tuesday night, Bell was able to get away after the chase ended in a crash.

Scroggs and Miller were also charged with murder, burglary and robbery.

Upsall was found shot to death in her Rochester home Tuesday evening. Investigators said there were signs of forced entry.

Officials have not said what was taken from the home.

ABC 57's Jaclyn Kelley is going to the Fulton Co. Jail for interviews and together more information into Bell's arrest. We will have a live report coming up tonight at 7 & 11 p.m.