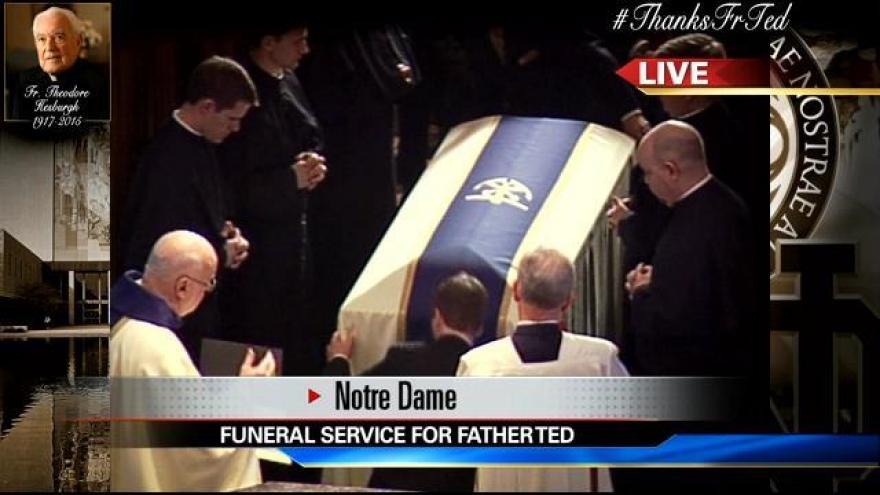 The funeral for Rev. Theodore M. Hesburgh C.S.C. was held Wednesday afternoon at the Basilica of the Sacred Heart on the University of Notre Dame campus.

Father Hesburgh died February 26 at the age of 97.

A thousand people were in the Basilica and thousands watched the service on television or online to remember Father Hesburgh's life and legacy.

Current Notre Dame President Father John Jenkins said Father Hesburgh did so much good for so many people, which was a dream fulfilled.

“How can we draw together the strands of a life that stands so many years that served so many realms that touched so many lives, Father Ted gave us answers, often,” said Father Jenkins.

He often had answers to difficult questions, but it always came down to right versus wrong.

He championed civil rights and women's rights at times where it wasn't popular.

It took courage to stare down hate, poverty and injustice in order to make the world a better place.

“Being a priest he said would give him great power to do great good for everyone in need,” said Jenkins.

His brother, Jim Hesburgh, said Father Hesburgh knew at a young age that being a priest was his calling.

He was ordained a priest in the same Basilica where his funeral was held.

“He had two major focuses throughout his life, his priesthood and Notre Dame,” said Hesburgh.

Father Hesburgh was loved by all.

“We're overwhelmed by this tremendous show of love and support. All that for so long we have taken for granted with Father Ted has come into focus,” said Hesburgh.

His brother says after a life spent giving, Father Hesburgh can rest in everlasting peace.

“Well done our faithful servants may you have eternal paradise. Have mercy on his soul. Amen,” said Hesburgh.