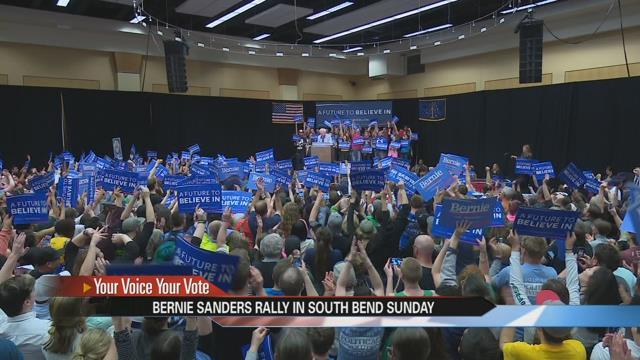 “Looks to me like South Bend is ready for a political revolution!” Sanders said to cheering supporters inside the Century Center Sunday.

Thousands of Sanders supporters turned out for the event to hear their candidate ahead of Indiana’s primary.

“Our vote has never mattered in the primaries, so it’s pretty exciting that for the first time, my vote will count before the election,” Bernie Sanders supporter Rachel Scheid said.

Sanders repeatedly addressed the importance of a victory here in the Hoosier state.

“Looks to me like we’re gonna win here on Tuesday!” he said.

But he also delivered his signature stump speech, addressing everything from breaking up the big banks to ending mass incarceration. He even mentioned South Bend specifically.

“And within the South Bend city limits, 45 percent of working families are living in poverty or close to poverty,” Sanders said to supporters.

Supporters lined up outside the Century Center hours in advance – some coming as early as 9 a.m. – hoping to catch a glimpse of a presidential candidate in Michiana.

“I trust him,” Bernie Sanders supporter Marie Flake said. “And that’s why I’m voting for Bernie.”

Sanders wrapped up the rally by reminding his supporters just how important Indiana’s primary has become.

“I hope very much that Indiana will join states throughout this country in the understanding that we need a political revolution,” Sanders said. “Thank you all very much!”

The massive crowds remained peaceful throughout the rally and there were not any noticeable protesters at the event.

Republican frontrunner Donald Trump will be holding a rally at the Century Center Monday evening.