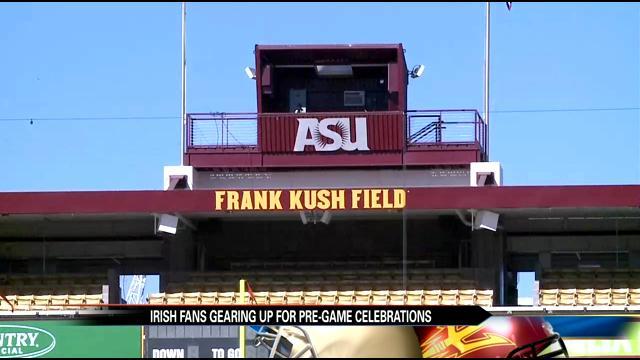 Fighting Irish fans from all over the country are headed to Arizona for Saturday's game against Arizona State.

It's one of the last times Notre Dame will take on a ranked opponent during their regular season.

Both teams boast a 7-1 record and they each want to win so they can stay in the running for the college football playoffs.

Arizona State University's sun devil stadium holds nearly 70,000 fans and is located in the northern part of the Tempe campus.

ASU's Athletic Director Ray Anderson says they are expecting a sellout crowd-and have already been forced to turn many fans away who are still looking for tickets.

Not all fans in town this weekend are here for the Sun Devils.

The Notre Dame Alumni Club of Phoenix expects thousands of Irish fans to tailgate and attend the game Saturday.

"Arizona State will have a loud and enthusiastic crowd, but they also don't travel like Notre Dame does. I'm expecting a good portion of the top of the stadium to be in blue, green, gold and white for the Irish on Saturday," said Chris Courey, the President of the Notre Dame Alumni Club of Phoenix.