Threatening signs in River Park cause a stir 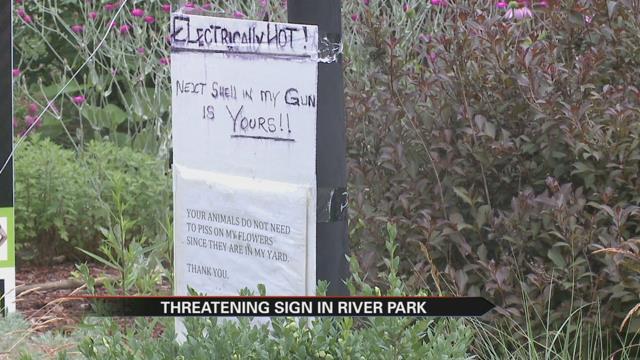 For three years Dale Huston had a sign in his yard telling people to not let their pets use his yard as a place to relieve themselves. On Wednesday, added threatening language to the sign and it caused a stir in the neighborhood and on Facebook.

The aggressive words disturbed some and brought police out to the River Park neighborhood.

“For three years of asking people and posting a sign that says your animals do not need to pee on my flowers because they are in my yard - and I've just had enough so last night I went to an extreme,” says Huston.

Huston says he puts a lot of effort into his yard and is tired of finding his plants dying. That is why he displayed a sign threatening those who walk their pets by his yard at gun point.

“I posted a sign that says electrically hot and wired it off the light pole and 'next shell in my gun has your name on it,'” says Huston.

This had many talking on the River Park Facebook page.

Neighbors with pets think there are less aggressive ways to address the issue.

“I think he is taking it to an extreme. He could put up a small fence or there are other options,” says Rick Bright of South Bend.

Bright walks his dog in the River Park neighborhood and says there would be serious repercussions if his animal was injured.

“That's pretty harsh I mean to shoot an animal, it's against the law,” says Bright.

Because of Huston's extreme measures police were called Wednesday afternoon.

But after finding that the wire wasn't even connected to an electrical box, police didn't believe Huston committed a crime.

A police report was not made so the St. Joseph County Prosecutor's office could not comment on the legality of this case. Police add if a specific person would have been targeted on the signs, there may have been more serious consequences.

As for Huston he has taken down the signs but is determined to catch whoever is ruining his plants and is investing in security cameras.
Share this article: