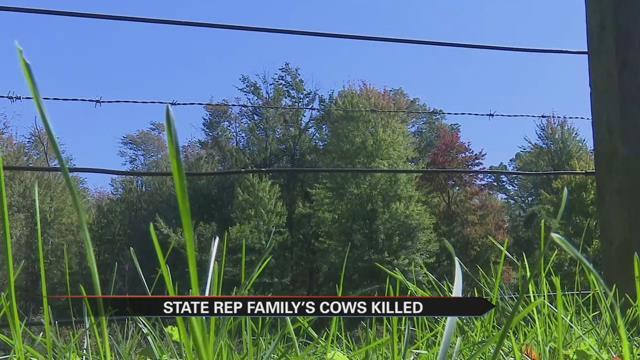 "When you find out that they've been shot, and bled internally to death, that's just a sinister thought," he says. "That's what made my heart sink."

He saw two of the carcasses the morning of October 9, when he was returning home from church. And just hours later, he received a call from his insurance agent Monday morning, bearing bad news about his third and last cow.

Miller's insurance agent told him that he "went out to the woods, and it took him about 20 seconds to find .22 holes in the chest cavities of the cow," he recalled.  He said that was the worst part.

"It, very likely, was someone who came back on a second night, on Sunday night, to kill the third one," Miller says.

The pasture is just steps away from the Miller's home. Needless to say, the family is a little concerned.

"That gave us a scare as to who this was, what's next, if there's anything next," he explained.

The steers were to be raised for beef for the family, and now they're moving on after the loss.

Miller's 17-month-old daughter doesn't understand what happened, and still goes outside, making moo-ing noises at the pasture.  But Miller says it's not just about the loss of the cows.

And while they know they couldn't have prevented it, they plan on talking about ways to protect their future livestock from anything like this.

But Miller just wants the culprit caught.  He says the whole area has lots of livestock, and he doesn't want anyone to have to worry about something like this happening to them.

Anyone with any information should contact the St. Joseph County Sheriff's Office.