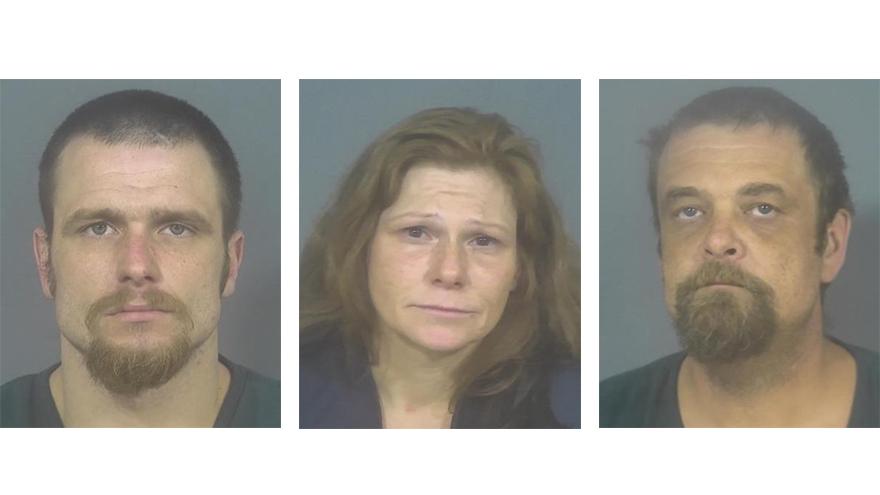 ST. JOSEPH COUNTY, Ind. -- Three people are facing armed robbery charges after allegedly stealing over $1,200 worth of merchandise from Walmart, according to court records.

On March 31, South Bend Police responded to the Walmart on Ireland Road for an armed robbery.

A loss prevention officer told police she had been watching a man in a black hooded sweatshirt and tan pants in the store. The man placed multiple items in his cart and checked out at the self checkout lanes, reports said.

When the man attempted to leave the store with his cart of items, the loss prevention officer attempted to stop him.

The man pulled out a gun and pointed it at her and said, “get out of my way,” according to the probable cause affidavit.

The store employee stepped back and the man walked out of the store with the merchandise.

Outside, the man placed the items from the cart into the back of a red pickup truck, reports said.

A short time later, a Pokagon Tribal Police officer spotted a red pickup truck pull out of a gas station in the 3300 block of Prairie Avenue, and followed it to a gas station at Prairie and Locust/Olive, reports said.

The driver went into the store and two passengers remained in the truck.

When additional officers arrived on scene, they blocked in the pickup truck so it couldn’t leave.

When the driver came out of the store, he began to walk away, but was detained.

He was identified as Glen Peck.

As officers approached the pickup to speak with the other occupants, the man in the front passenger seat moved into the driver’s seat. He moved the truck forward, then backward, then put it back in park, reports said.

The man was removed from the vehicle and was identified as Alexander Tweedy.

A loaded handgun in a holster was removed from Tweedy’s hip, according to the probable cause affidavit.

A detective reviewed Walmart surveillance video of the incident. It showed Tweedy with a car full of items in the checkout lanes.

While scanning items, he pulled out the handgun and placed it in a brand new holster, reports said.

The video showed the loss prevention officer stop Tweedy near the doors, then Tweedy pulled out the gun and the employee backed away, according to reports.

An itemized list of merchandise scanned by Tweety totaled $1,209.56. Tweedy put $5 in the register, according to the probable cause affidavit.

Officers recovered 39 of the 61 items stolen from Walmart.

In an interview, Tweedy said he went to Walmart with Peck and his mother, but only had $50 on him. He said he put the merchandise in his cart, scanned it then walked out, reports said.

Tweedy did not have a license for the handgun, police said.

In an interview with Kalin, she told police she was in the pickup truck while Tweedy went into the store. When he came out with the merchandise and threw it in the back of the truck, she asked what he was doing, she said. Tweedy said he stole the items and that she could get out of the truck if she wanted to, reports said.

Kalin stayed in the truck.

Tweedy then left the store quickly, threw items into the back of the truck, got in and told Peck to drive away, reports said.

Police said they found Peck in possession of a syringe. He told police he did not have a medical reason to have a syringe, but admitted he used meth, according to the probable cause affidavit.

Tweedy has been charged with armed robbery, pointing a firearm and carrying a handgun without a license.

Peck has been charged with armed robbery and unlawful possession of a syringe.

Kalin has been charged with armed robbery and false identity statement.