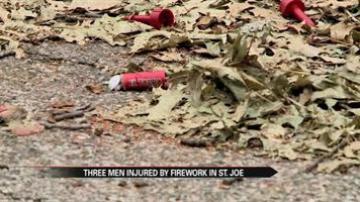 ST. JOSEPH, Mich. -- Three men were taken to the hospital after a fireworks accident just before midnight Friday.

The accident happened in the front yard of a house in the 600 block of Manitou Road.

"I was in the street, I saw an explosion that didn't make it far off the ground, it was about chest high and after that everything got quiet," said Jeff Doan, Manitou Road resident.

Doan says instantly, he knew something was wrong.

"There was a lot of blood. A lot of frantic people," said Doan. "It was similar to a large mortar that goes boom, but it only went about chest high."

"When we came home there were two rescue squads and three police cars in the street and it looked like a war zone," said David Proctor, Manitou Road resident.

Police say one man lost an eye, another lost two fingers and the third had a ruptured eardrum.

All three men were in town to celebrate the holiday with friends, according to residents.

It's a reminder that fireworks are dangerous.

"It definitely ruined the holiday for a few families, which is so sad," said Doan.

Police have not released the names of the three men injured. Officers say a further investigation shows the men improperly launched the firework.