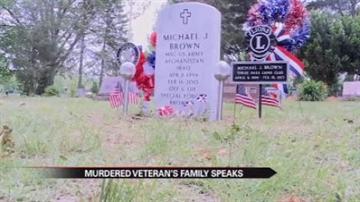 THREE OAKS, Mich. --  Memorial Day is a time to remember veterans who gave the ultimate sacrifice and died in the line of combat. One of the veterans honored Monday was Michael Brown who was murdered in El Salvador 3 months ago.

“It is a day of honoring our fallen veterans,” said Shannon.

One of those Three Oaks fallen veterans honored was Michael J. Brown.

He was a 28-year army veteran in the Special Forces.

“It is a little different. He was not a casualty of an armed conflict,” said Barry Brown, Michael's brother.

Brown was murdered three months ago in El Salvador while visiting his estranged wife.

According to media in El Salvador, the two were taking a drive when rebels stopped the car and shot him at close range.

Barry said he still does not know who killed his brother or why.

“Very little has happened when it comes to an arrest or prosecution,” said Barry.

Barry says he understands murder investigations take time, but he is becoming restless and has started taking the matter into his own hands.

“I did reach out to local Congressman Fred Upton and asked him would you please look into this and have your folks get back to me,” said Barry.

Barry has set up a scholarship fund in his brother’s name. They will be giving it away to a student on flag day, June 16th, which was Michael Brown’s favorite holiday.