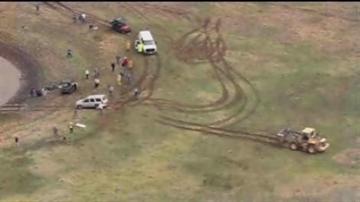 The suspect crashed into a pond, killing three people trapped inside an SUV. Four others escaped by climbing onto the roof of the SUV.

Police said the driver took off after an officer tried to pull him over for a broken headlight.

Homeland Security and federal immigration officers are investigating. The suspect's passengers are believed to be suspected illegal immigrants.