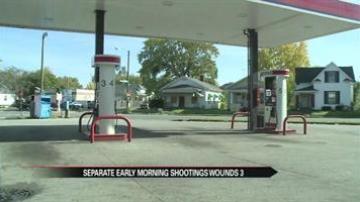 SOUTH BEND, Ind.-- Police are asking the public for information regarding a shooting that happened early Sunday morning on Olive and Bertrand Street. Three people were wounded and police said no one is in custody.

A worker at the Citgo gas station on the corner of Olive and Bertrand streets said there were blood stains on the pavement when he got to work Sunday morning.

He said a male was shot when he walked outside the convenience store around 4am.

One lady who was getting gas was upset because of the amount of violence in her neighborhood.

Shavelle Calmes said, “There has been a lot of violence, and for me it’s scary because I have young children!”

Calmes said it's unnerving to have shootings close to her home.

Calmes said, “It makes me kind of nervous to come to this gas station because I know a lot is going on around here, and it makes me want to travel further to get gas so I’m not in the wrong place at the wrong time.”

Calmes has several children and fears for their safety.

Calmes said, “I moved here to be around family but I never thought it would be this endangering for me and my children.”

Kennedy Primary School is just steps away from where the shooting happened.

Calmes said, “There are people out here that have young children and I just pray that everyone sees what I see and understands and feels where I come from."

Police are asking for tips to be called into Crime Stoppers at 288-STOP.