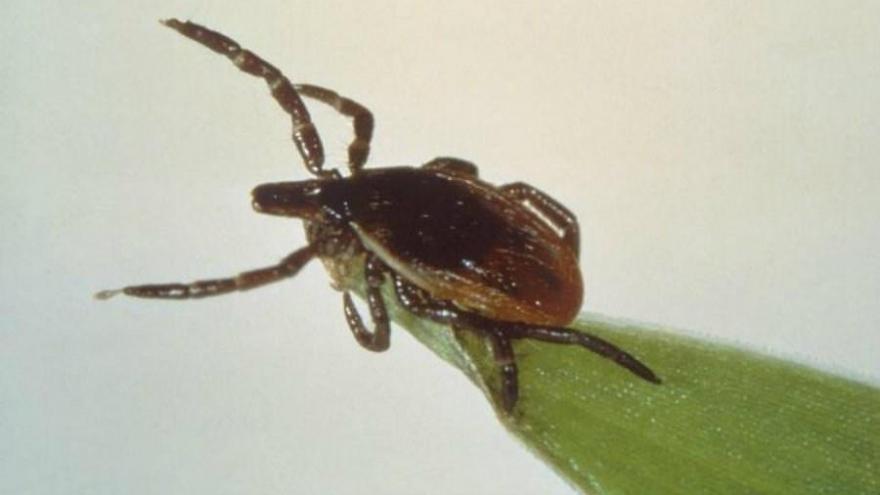 (CNN) -- A normal bedtime routine turned into a trip to the emergency room for an Oregon couple and their 3-year-old after she experienced partial paralysis because of a tick bite.

Amanda Lewis of La Grande described the scare on Facebook, saying her daughter, Evelyn, became fussy after a bath on May 12 and couldn't stand.

Amanda Lewis and her husband, Lantz, posted a video of their daughter still struggling to stand the next morning; the couple asked family members who are nurses for help figuring what was wrong. The video has since been watched more than 17 million times.

"Evelyn started acting a little weird last night around bedtime. She didn't want to stand up after her bath to get into her pajamas. I helped her and got her in bed. She was a little fussy last night and I ended up sleeping in bed with her all night," Amanda Lewis posted.

The girl's symptoms began to get worse, and since Lantz has a history with cancer, they rushed Evelyn to the ER.

Lantz Lewis told CNN, "I was in the Navy, and they found a rare brain tumor typically found in children. I couldn't run straight, and I felt dizzy, so our minds starting going to that."

At the hospital, the doctor told the couple he had seen fewer than a dozen children Evelyn's age with similar symptoms over the past 15 years and suggested the cause may be a tick.

"He combed one side of her head and then started combing the back and found the tick," Lantz said. "He left, got some gloves and a pair of tweezers and pulled it off."

The doctor found a dog tick on Evelyn and told the couple they are not the type that carry Lyme disease.

Goudarz Molaei, a research scientist at the Connecticut Agricultural Experiment Station, says he has seen larger numbers of ticks this year and is predicting more Lyme infections because of higher infection rates among them.

Historically, in the winter, the station doesn't receive many ticks for testing, he said: one or two per month, maybe five at the most.

"This year so far, we've received hundreds of ticks," Molaei said. "Since April 1, we've received nearly 1,000 ticks." This greater abundance comes as a result of two consecutive warm winters, which the insects are better able to survive, and longer springs and summers. Peak season is expected to be around June or July.

The Centers for Disease Control and Prevention says tick bites can rarely cause paralysis because of a toxin in the insect's saliva. Symptoms usually resolve soon after the tick is removed.

The next day, Evelyn was back to normal. Her dad said her only complaint over the next couple of days was itching on her head, where the scab was.

In an update on Facebook, Amanda Lewis wrote, "She is now pretty much completely back to her feisty little self."

Lantz Lewis said the couple is surprised at how many views the video has gotten. "We had no intention of making it public. The doctor said this could be a bad tick year, and the video can help show the symptoms parents should look for."