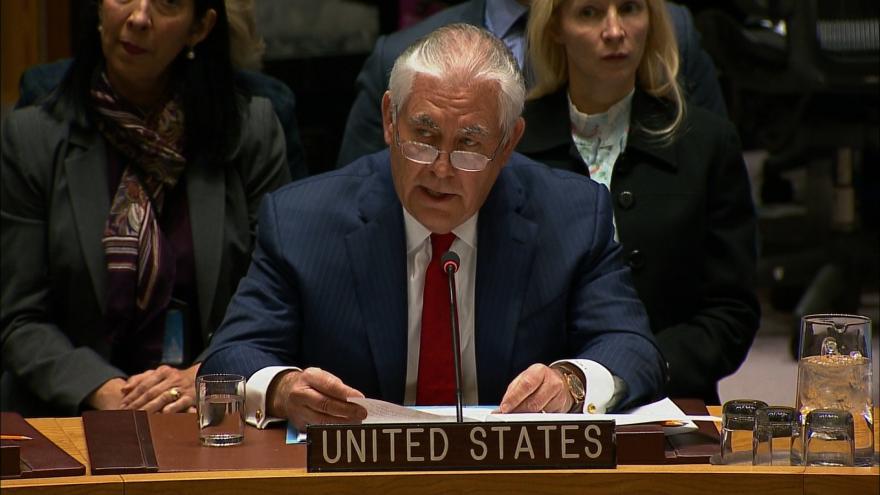 (CNN) -- Secretary of State Rex Tillerson directly rebutted North Korea's representative to the United Nations on Friday, rejecting his claim that the US is to blame for tensions on the Korean peninsula and declaring that he and the White House are in lockstep on policy.

He stated that there is "no daylight between the President's policy and the pursuit of that policy" on North Korea, addressing questions about a possible rift between the White House and State Department on starting talks with Pyongyang.

Tuesday, Tillerson had said he was willing to start talks with North Korea without preconditions. The comment during a Q&A took White House staffers off-guard, they said.

During Friday's specially convened UN Security Council meeting to discuss North Korea's nuclear program, Tillerson clarified that "a sustained cessation of North Korea's threatening behavior must occur before talks can begin. North Korea must earn its way back to the table."

In the meantime, the US will continue a campaign to pressure North Korea diplomatically and financially, he said, as North Korea's ambassador to the UN looked on. TIllerson added, "militarily we are going to be prepared should something go wrong."

After North Korea's ambassador Ja Song Nam addressed the council and described his country's nuclear program as an "inevitable self-defense measure" against the US, which was "terrified by the incredible might of our republic" and its "nuclear force," Tillerson asked for another chance to speak and hit back.

Tillerson said the acts of North Korea are a "clear violation" of international law that "cannot be ignored," and added that the regime "must be held accountable."

Later, in remarks to the press, Tillerson was asked directly to explain where the US stood on preconditions. He flipped the question, rejecting proposals from Russia and China for a "freeze for a freeze," in which the US would halt military exercises and North Korea would stop nuclear development. "We are not going to accept preconditions," Tillerson said.

He did not say a line that had appeared in his prepared comments, distributed by the State Department on embargo earlier in the day. Tillerson had been set to say that, "apart from that step, there are no preconditions for talks, nor will we accept pre-conditions from North Korea or others."

Asked about the omission, the State Department's undersecretary of public affairs, Steve Goldstein, said that "nobody took that out for him. The Secretary doesn't speak word for word from prepared remarks and works to deliver the words that will be the most impactful to the audience he is addressing."

Tillerson did double down on the administration's tough talk, even as other countries warned that US rhetoric and actions are part of the problem.

"We have been clear that all options remain on the table in the defense of our nation, but we do not seek, nor do we want, war with North Korea," Tillerson said. "The United States will use all necessary measures to defend itself against North Korean aggression, but our hope remains that diplomacy will produce a resolution."

But Russia's ambassador to the UN, Vasily Nebenzya, said, "it should be clear to everybody that the DPRK is hardly going to refrain from its nuclear missile program while it feels a direct threat to its security."

Referring to joint military drills the US conducts with South Korea, Nebenzya said, "indeed this is how Pyongyang evaluates the regular wide-scale maneuvers and exercises by the United States and its allies in the region."

"In the conditions of such tension, one ill thought out or misinterpreted step could lead to lamentable consequences," the Russian said, warning of a "policy of mutual pressure and intimidation."

He challenged Tillerson, questioning the US commitment to finding a peaceful resolution. He noted that after about two months of quiet on North Korea's part, the US held massive military drills with South Korea and then announced it was placing Pyongyang on a list of state sponsors of terrorism.

"All of these steps force us to wonder about the sincerity of statements that suggest that there is a preference for a peaceful approach to resolving the crisis in DPRK," Nebenzya said.

China's ambassador echoed Russia's rebukes. "The current situation on the peninsula is not caused by any one party alone and it's unfair to impose on any one partner the responsibility" for resolving it, said China's Deputy Permanent Representative to the United Nations Amb. Wu Haitao. He called for dialogue, an end to US military exercises, and an end to "mutual blaming."

Tillerson rejected the argument that the US bore any blame and made clear that there would be no let-up in his campaign to squeeze North Korea and steadily choke off its diplomatic channels and means of financial support. That campaign, he said, must be given time to succeed.

"North Korea's growing capabilities reflect a direct threat to our security and the security of the entire world," Tillerson said. "We do not regard this claim as an empty threat. In the face of such a threat, inaction is unacceptable for any nation."

The US is even more determined to continue its peaceful pressure campaign, Tillerson said, with the goal of "setting the conditions for North Korea to engage in serious negotiations toward the complete, verifiable, and irreversible abandonment of its nuclear weapons programs."

The top US diplomat, who met Thursday with Trump and Defense Secretary James Mattis, urged countries in the room to do more than just meet the letter of UN Security Council resolutions sanctioning North Korea -- and called out Moscow and Beijing in particular.

"Continuing to allow North Korean laborers to toil in slave-like conditions inside Russia in exchange for wages used to fund nuclear weapons programs calls into question Russia's dedication as a partner for peace," Tillerson said.

"Similarly, as Chinese crude oil flows to North Korean refineries, the United States questions China's commitment to solving an issue that has serious implications for the security of its own citizens," he added.

Tillerson extended that challenge to other countries that have been slow to fully implement existing resolutions on North Korea, saying that it calls "into question whether your vote is a commitment to words only, but not actions."

Rising tensions between the US and North Korea, which conducted its largest nuclear test in September and fired off a powerful ICBM in late November, have raised deep concern worldwide.

It is "the most tense and dangerous security situation in the world today," UN Security General Antonio Guterres told the UN as the meeting opened. Guterres said he was concerned about "unintended escalation or miscalculation," which he said was being increased by "misplaced confidence, dangerous narratives and the lack of communications channels."