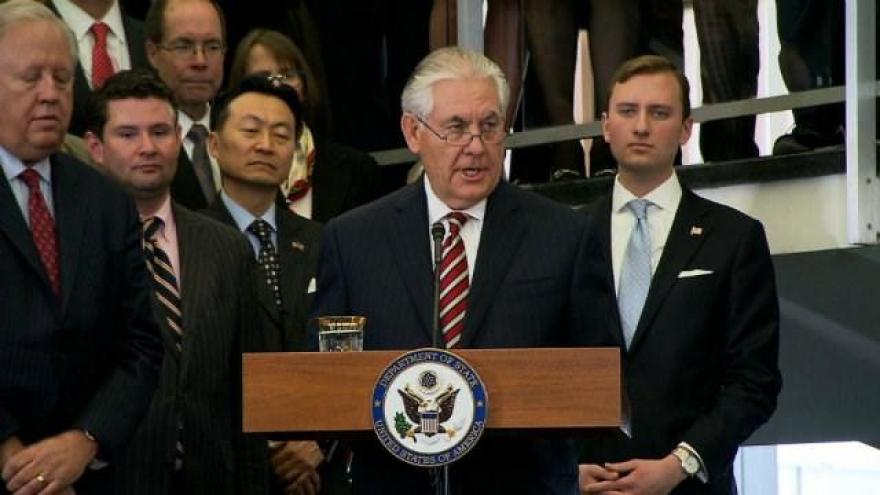 WASHINGTON (CNN) -- Secretary of State Rex Tillerson and Chairman of the Joint Chiefs of Staff Gen. Joseph Dunford meet face to face with their Russian counterparts Thursday, as the Trump administration evaluates the future direction of US-Russian relations.

Tillerson, a former oil executive who was confirmed as Secretary of State two weeks ago, departed Wednesday for a G-20 ministerial meeting in Bonn, Germany -- his inaugural international trip as the United States' top diplomat. He'll be joined in Bonn by Russian Foreign Minister Sergey Lavrov, Chinese Foreign Minister Wang Yi, and representatives from the world's other major economies.

The Russian Foreign Ministry announced Wednesday that Tillerson and Lavrov will meet on the sidelines of the conference on Thursday. It will be their first such meeting since Tillerson took office.

Tillerson's trip comes as the Trump administration is seeking to reassure skittish allies in Europe the US has their backs, all while exploring new areas for cooperation with Russia as advocated by President Donald Trump over opposition from some members of his own party.

The White House is in turmoil after National Security Adviser Michael Flynn's resignation over questions of the nature of conversations with Russia on sanctions before taking up his administration role. Congress is now investigating various aspects of Russia's alleged interference in the US election while members question Trump's own relationship to the country.

US allies in Europe are looking for indications from the Trump administration that the US will take a stand when it comes to countering Russian aggression in parts of Eastern Europe, particularly in Ukraine, where violence has flared in recent weeks between government forces and Russian-backed separatist groups.

A senior administration official told reporters that Tillerson will push Russia to honor its 2015 commitment to use its influence over those groups to stem the fighting. He is also expected to back continued multilateral sanctions on Russia related to their annexation of Crimea.

European diplomats are watching the new US officials all the more closely after Trump's disparagement of NATO and questions about the utility of sanctions. Similarly, Western military officials are closely following Defense Secretary James Mattis' participation in the NATO ministerial meeting in Brussels and Munich Security Conference this week as well.

And in an anticipated meeting with British Foreign Secretary Boris Johnson, Tillerson will have an opportunity to discuss the future of the US-UK relationship with his counterpart as the UK prepares to exit the European Union.

It remains to be seen whether the Cabinet secretaries will outline any specific shifts in US positions -- despite Trump's rhetoric before and after the election -- both on European issues as well as the Middle East.

The ongoing conflicts in Syria and Yemen are expected to be a major focus of discussion on the sidelines of official meetings. Trump has long criticized the Obama administration for its approach to the Syrian crisis, suggesting he would reconsider providing aid to moderate groups taking on Syrian President Bashar al-Assad and take more aggressive measures against ISIS.

A senior administration official said the secretary of state will likely approach his initial meetings on Yemen and Syria as an opportunity to gauge the state of play rather than influence the debate.

"He'll be primarily in listening mode," the official said. "I think we all understand how complicated the conflict (in Syria) is, and I think he wants to use this initial engagement to get a sense of where the parties stand and then he'll work with his Syria team on a way forward."

It's still unclear exactly how the new administration will go about changing course in Syria, and whether doing so will involve additional cooperation with Russia -- which provides military support to the Assad regime.

But even as Tillerson's plane was taking off in Washington, the Pentagon announced the meeting between Dunford and his Russian counterpart Valeriy Gerasimov, which will take place Thursday in Baku, Azerbaijan.

"The military leaders will discuss a variety of issues including the current state of U.S.-Russian military relations and the importance of consistent and clear military-to-military communication to prevent miscalculation and potential crises," the Pentagon's statement read.

At the same time, Trump's envoys have been expressing positions more keeping with previous US policies. While the Trump administration's response to the recent violence in Ukraine has, so far, been muted, the US Ambassador to the United Nations, Nikki Haley, indicated the US would maintain sanctions on Russia for annexing Crimea in 2014. She condemned what she called the "Russian occupation" of the Ukrainian territory, giving some reassurance to US allies in the region.

The Russian Embassy in Washington made clear its opposing perspective in a tweet Tuesday afternoon: "We will continue to patiently explain to the new US administration why Crimea is Russia."

Mattis in particular is well-suited to calm Western allies.

He is the former commander of a strategic-level NATO headquarters and told reporters Tuesday on the way to Brussels that, "This has been the most successful military alliance in history."

The NATO gathering comes as the US and the rest of the alliance have begun positioning troops and equipment closer to the eastern frontier with Russia. The US has deployed thousands of troops and tanks to Poland and Romania in recent weeks, while other NATO allies have sent troops to Latvia, Lithuania and Estonia.

"We are all looking forward to receive Secretary Mattis here at NATO tomorrow and to be able to sit down with him and to discuss many different topics including burden sharing, but also NATO's role in fighting terrorism," NATO Secretary General Jens Stoltenberg told reporters Tuesday.

Also this week, Trump's Vice President, Mike Pence, plans to address the Munich Security Conference over the weekend and meet with German Chancellor Angela Merkel. The meeting will be Merkel's first in-person encounter with a member of the Trump administration since the inauguration last month.