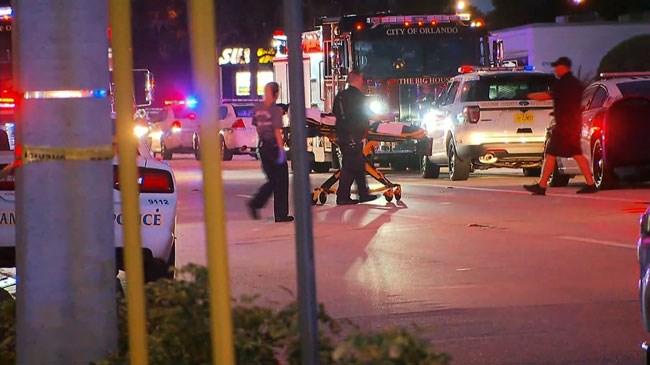 (CNN) -- Here's a timeline of the deadliest mass shooting in U.S. history, when a gunman killed 49 people and wounded 53 in the early morning hours of June 12 at Pulse nightclub in Orlando, Florida. This timeline is based on information provided by Orlando police Chief John Mina, Mayor Buddy Dyer, first responder dispatch, witness accounts, the FBI and other law enforcement authorities.

Sunday, 1:58 a.m. ET: Some 320 people enjoy a "Latin flavor" event at Pulse a gay nightclub in the heart of Orlando. Clubgoer Patience Carter hears gunshots in the center section of the club shortly after she and friends agree to contact Uber for a ride home. They rush into a bathroom.

Around 2:02 a.m. ET: An officer working extra duty in full uniform at the club responds. He and two officers nearby open fire on the shooter, and a gun battle ensues.

The officer working extra duty at the club waits for backup. After three or four officers arrive, officers enter the club and exchange gunfire with the shooter.

The shooter retreats to a bathroom inside the club. No further shots are fired until 5:00 a.m. ET.

Some 100 officers from the Orange County Sheriff's Office and the Orlando Police Department respond to the chaotic scene over the next 45 minutes.

While the gunman was barricaded in the bathroom, officers were inside the club getting as many people out as they could.

--Mommy I love you

--In club they shooting

2:09 a.m. ET: Pulse posts an urgent message on Facebook: "Everyone get out of Pulse and keep running."

A tense standoff follows. Police say they had to wait three hours to access the situation, get armored vehicles on the scene and make sure they had enough personnel.

Approximately 2:22 a.m. ET: Shooter talks to 911 dispatch three times. He calls and hangs up. He calls and talks briefly. The dispatcher calls back. During the calls, the shooter pledges allegiance to ISIS. He also mentions the Boston Marathon bombers and a Florida man who died as a suicide bomber for al Nusra Front in Syria. Patience Carter said he also told the 911 dispatcher he wanted America to stop bombing his country. She said he started speaking a foreign language, probably Arabic, when he ended the call.

Approximately 2:45 a.m. ET: Shooter calls News 13 Orlando and speaks to producer Matt Gentili. Gentili says the shooter took responsibility for the attack and claimed he did it for ISIS.

--He;s in the bathroom with us

--(mom) is the man in the bathroom wit u

Her son did not survive the shooting.

Approximately 2:30-5 a.m. ET: Hostage negotiators communicate with the shooter while he's barricaded in the bathroom. He threatens to put explosive vests on four hostages and to detonate the vests in 15 minutes. SWAT officers prepare for an explosive breach.

Approximately 4 a.m. ET: Orlando's chief medical examiner, Dr. Joshua Stephany, receives a call about 11 or 12 casualties in the club. Soon after, he receives notification that the body count had reached 20, then 30. Stephany and his staff head to the nightclub.

4:57 a.m. ET: About 40 patients have already been transported to Orlando Regional Medical Center, according to Orlando fire dispatch audio.

Approximately 5 a.m. ET: Heavily armed SWAT team members use an armored vehicle to smash down a door at the club, clearing the way for some 30 people inside to flee to safety.

SWAT officers confront the suspect in the doorway, shoot and kill him.

7:15 a.m. ET: Police Chief John Mina announces at a press conference that multiple people have died inside the club. He says the shooter was armed with an assault-type rifle and a handgun.

1 p.m. ET: President Barack Obama addresses the attack from the White House, calling it an act of terror and an act of hate.

The shooter was a "person filled with hatred," Obama says. He also orders the American flag be lowered to half-staff at the White House and all other government buildings until sunset on June 16.

"In the face of hate and violence, we will love one another," Obama says. "We will not give in to fear or turn against each other, instead we will stand united as Americans to protect our people, to defend our nation, and take action against those who threaten us."