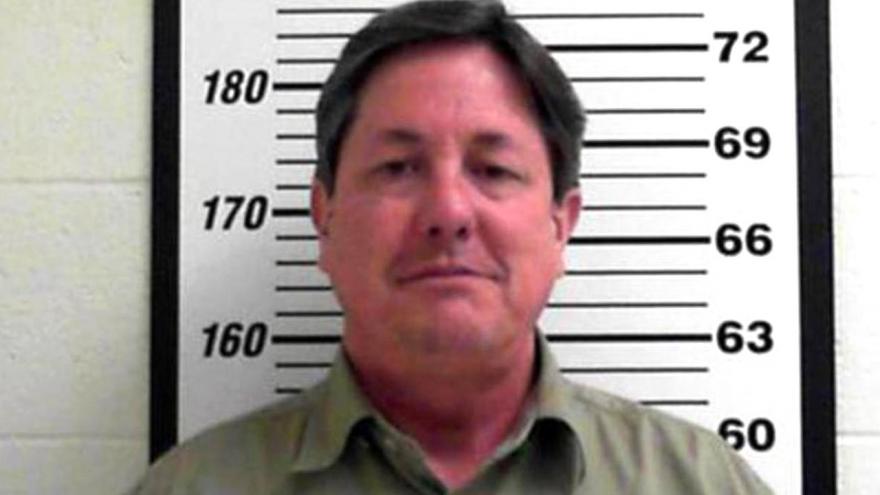 (CNN) -- Bishop Lyle Jeffs, leader of the Fundamentalist Church of Jesus Christ of Latter-day Saints, was living out of his car for two weeks before his arrest in Yankton, South Dakota, an FBI official said Thursday.

Jeffs, who had been on the run from authorities for almost a year, did not resist arrest late Wednesday and is being held in Minnehaha County Jail in South Dakota. He appeared in court Thursday afternoon and didn't answer reporters' questions as he was brought in.

"The long arm of the law will eventually catch up with you and bring you back to justice," John Huber, the US Attorney for the District of Utah, said earlier. "Undoubtedly, the flight from prosecution and his fugitive status will play a part (in the upcoming court case)."

The FBI received a tip from a citizen Tuesday, which included a partial description of Jeff's vehicle. The tip was instrumental to tracking down Jeffs, said Eric Barnhart, special agent in charge of the FBI's Salt Lake City, Utah, bureau.

Yankton is roughly 400 miles east of Pringle, South Dakota, where the FLDS owns a compound, Barnhart said. It's not clear if FLDS members provided Jeffs support while he was on the run, but Barnhart said the fugitive bishop had limited communication and resources over the last year.

Jeffs, 57, is expected to be extradited to Utah in the next couple of days "now that he is back in the loving embrace of law enforcement," Barnhart said.

Jeffs, younger brother of notorious FLDS leader Warren Jeffs, escaped house arrest last July after using olive oil to slip a GPS tracking bracelet off his ankle. At the time of his escape, the FBI warned the public that Lyle Jeffs was traveling with bodyguards and was considered dangerous.

Jeffs took over leadership of the polygamist Mormon sect after his older brother was arrested on child sex charges related to his underage wives.

According to the FBI's wanted poster, Jeffs was on home confinement while awaiting trial over his alleged involvement in a food stamp fraud case when he escaped.

Jeffs, another brother, Seth, and other conspirators were accused of defrauding the government of more than $12 million from the Supplemental Nutrition Assistance Program -- more commonly known as food stamps.

Church members were urged to allow the conspirators to use their food stamp cards to buy food, according to court documents.

Families that qualified for federal assistance were allegedly told to turn over their food stamp debit cards and take what they needed from a warehouse of pooled resources called "the bishop's storehouse."

As a result, the federal government alleges, some families subsisted on beans, rice and toast, while high-ranking church members got meat, turkey and seafood.

The government also alleges that the Jeffs brothers and others laundered money by swiping food stamp debit cards and ringing up "ghost" purchases at church-friendly businesses. The laundered cash allegedly was used on big-ticket items such as a $30,000 pickup truck, a $14,000 tractor and $17,000 in paper products.

An additional $250,000 was allegedly spent on printing costs for Warren Jeffs' self-published book of jailhouse revelations, "Jesus Christ, Message to All Nations."

A $50,000 reward had been issued for Lyle Jeffs' arrest. The disbursement of the reward money has not yet been determined, Barnhart said.

The FLDS split from the Church of Jesus Christ of Latter-day Saints in the 1930s after the Mormon establishment rejected polygamy.

Warren Jeffs took the reins of the sect in 2002 after the death of his father, the church's founder. He is serving a life-plus-20-year term for sexual assault. Jeffs was convicted in August 2011 of the aggravated sexual assaults of a 12- and a 15-year-old girl who he claimed were his "spiritual wives."

CNN's Euan McKirdy and Rashard Rose contributed to this report.