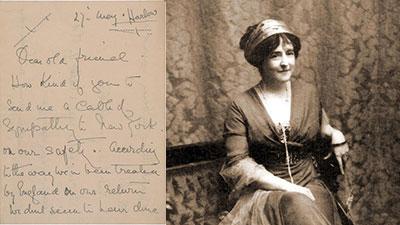 (CNN) -- An indignant letter written by a Titanic survivor to a friend in New York sold at auction this week for $11,875, according to RR Auction in Boston.

The remarks were written on Lady Lucy Duff-Gordon's personal letterhead and dated May 27, 1912 -- six weeks after HMS Titanic struck an iceberg and sank on its maiden voyage -- and seem to indicate that she and her husband, Sir Cosmo Duff-Gordon, didn't receive such a warm welcome home after their rescue.

"According to the way we've been treated by England on our return we didn't seem to have done the right thing in being saved at all!!!! Isn't it disgraceful?" Lady Duff-Gordon wrote.

The prominent London fashion designer and her husband, a Scottish baronet, escaped by boarding Lifeboat 1, which transported 12 passengers despite having capacity for 40.

Fewer than one-third of the more than 2,200 people aboard Titanic survived, hundreds fewer than could have lived if all of the lifeboats had been deployed and filled.

The couple were the only two passengers asked to testify during the British Wreck Commissioner's inquiry into the sinking. Their testimony, along with allegations that Cosmo had bribed the crew to row away faster rather than try to rescue others, made them popular fodder for tabloids.

Rumors that the Duff-Gordons tried to deter the crew from making other rescues were never corroborated, but Lady Duff-Gordon later said her husband was "brokenhearted over the negative coverage for the rest of his life," according to a news release from RR Auction.

"We remain fascinated by the Titanic tragedy and will for years to come," RR Auction's Bobby Livingston said.

Also auctioned was a letter Grateful Dead front man Jerry Garcia sent to a former Vogue cover model he met at a New York party in 1980.

In the letter, which sold for $32,500, Garcia asks the woman, "Pardon my handwriting, this is the first letter I've written in years."

He includes a sketch with the words, "Grateful Dead just played our first outdoor show of the year at a place called the Greek Theatre."

The historic Berkeley, California, music venue would become a home base for the band. Garcia died in 1995.

The auction item that pulled in the most was a signed 1965 Mosrite Ventures Guitar that belonged to Johnny Ramone. It sold for $71,875.