Top stories of 2012: Notre Dames rise to the top 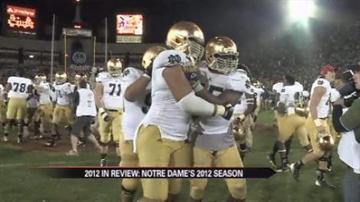 SOUTH BEND, Ind. -- 2012 was quite a year for Notre Dame Fans. From kicking off the season with a victory over Navy in Ireland, to a wild win against USC on the Trojans' home turf, the Irish have had a lot to celebrate leading up to the national championship.

At the beginning of the season, the Fighting Irish set the stage for what would be a long 13 week journey to the top.

"You can't climb Mt. Everest in one day, but you can do it with great preparation. You can do it with the focus from one day, one moment, one hour at a time. And we'll look at our schedule and say one game at a time. If we do that, we think we can get to the top of the mountain,” said Head Coach Brian Kelly.

But the Irish held their line.

The defense only allowed 2 rushing touchdowns this season and they only allowed an average of 286  yards of total offense per game.

"You know you always want to play good defense and you know great national teams that are ranked really high they have, they have good defenses so I know Coach Kelly when he got here he wanted to establish an identity on defense and I think he did that,” said Kapron Lewis Moore, Irish Defensive End.

The run dominant offense held their own, averaging 421 yards of total offense a game and 5 yards per rush attempt.

“I think as we went through the spring it became pretty apparent to me that the success of our offense was going to be predicated on what we could do up front and running the football. I think it started to emerge in all of our coaches' minds that it was going to be a run first kind of offense and still spread the field, still be able to attack. We need to get better in our passing game,” said Kelly.

From the shores of Ireland to the beaches of California, the Irish had to play for every yard, every point and every second of every game.

"This was another clear indication of how we got to 12-0. Our guys have an incredible resolve regardless of the circumstances of coming up and finding ways to win,” said Kelly.

Now the Irish are just one step away from the top of the highest mountain.