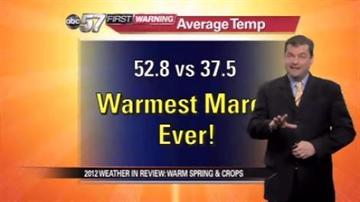 Be careful what you wish for, especially when you’re talking about weather. Fruit farmers in Michiana had to deal with extreme weather this past spring.

In March, South Bend hit 80 degrees five times during the month. The most for March ever.

There were nine consecutive days with highs over 70 degrees. The second-longest streak on record.

In addition to record highs nine days in a row, the area tied the warmest March day ever with 85 degrees on March 21.

In the end, the average temperature in March was 52.8 degrees. The normal average is 37.5 degrees.

So why was a warm March a problem? Trees and plants thought it was time to start blooming.

It would have been okay except cold temperatures returned in April.

The coldest day was April 12 when South Bend bottomed out at 27 degrees with widespread lows to mid 20s across the farms in Michiana.

The cold killed most of the buds and severely damaged the young, developing fruit.

The good news for farmers is that by taking the year off from bearing fruit, the trees and bushes should be nice and rested, and ready to deliver a very good crop for 2013.