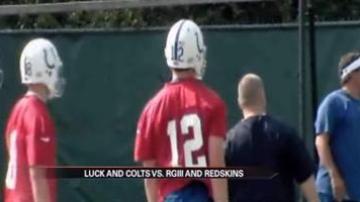 Andrew Luck and the Colts will square up against Robert Griffin III and the Redskins.

The rivalry started between the two standout quarterbacks when they were both finalists for the Heisman Award as seniors.

And later the two battled for the top NFL pick in the 2012 draft.

Luck won that round.

Now, the rookies will face off at 4 p.m. on Saturday.