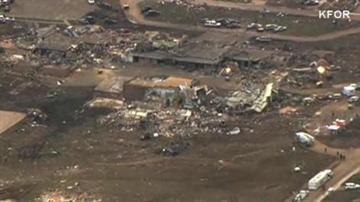 MOORE, Okla. -- The powerful tornado that slammed central Oklahoma Monday tore a path of destruction 17 miles long, according to the National Weather Service.

The tornado began west of Newcastle and ended east of Moore.

It stayed on the ground for at approximately 40 minutes.

The National Weather Service announced Tuesday the storm was an EF-5 tornado.

At least two dozen people were killed, including 7 children.