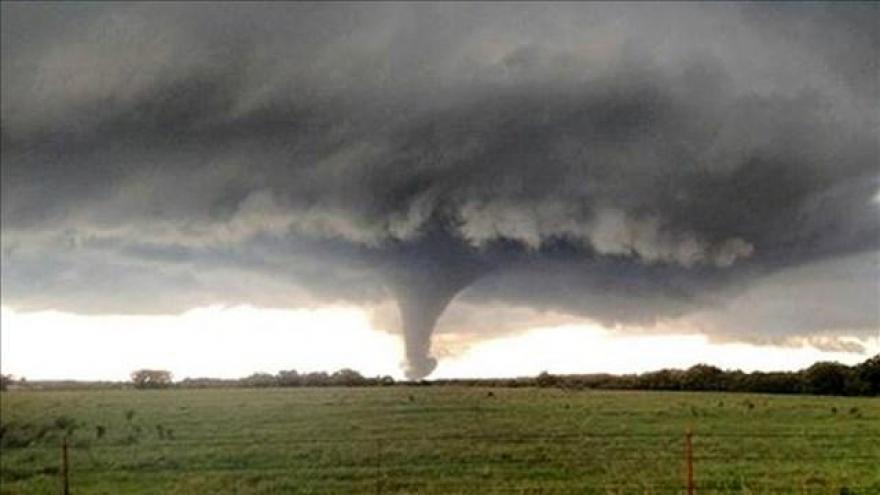 (CNN) -- Here's some background information about tornadoes, which are funnel-shaped clouds that form under thunderclouds and contain rapidly rotating air.

Tornadoes can lift cars, mobile homes, and animals into the air.

The damage path of a tornado is usually less than 1,600 feet wide.

Most tornadoes move at less than 35 miles per hour.

Most tornadoes last only a few minutes.

The most destructive and deadly tornadoes occur from supercells, which are rotating thunderstorms with a well-defined radar circulation called a mesocyclone. Supercells can also produce damaging hail, severe non-tornadic winds, unusually frequent lightning, and flash floods.

A tornado over a body of water is called a "waterspout."

The United States has the highest number of tornado occurrences in the world with an average of more than 1,000 tornadoes reported each year.

According to the National Weather Service, in 2016 there were 17 tornado-related deaths in the United States.

Most of the tornadoes in the United States strike in Tornado Alley, which spans the Midwest and the South.

Tornadoes usually occur during the spring and early summer, most often in the late afternoon and early evening.

A tornado watch is issued by the National Weather Service when atmospheric conditions promote the forming of tornadoes.

A tornado warning is issued when Doppler radar detects a mesocyclone in a thunderstorm, or when a funnel cloud has been spotted.

A tornado emergency is enhanced wording in a tornado warning indicating a large tornado is moving into a heavily populated area. Significant widespread damage and numerous fatalities are likely. The term was coined by forecasters in May 1999 and is used sparingly.

Enhanced Fujita Scale:
The Fujita scale is used to estimate the wind speed of a tornado by the damage the tornado causes.

EF0 is the weakest point on the Enhanced Fujita Scale and EF5 is the strongest.

An EF5 tornado can tear a house off its foundation.

Category EF3: Wind speed between 136 and 165 miles per hour: Severe damage. Roofs and some walls torn off well-constructed houses; trains overturned; most trees in forest uprooted; heavy cars lifted off the ground and thrown.

Timeline:
March 18, 1925 - One of the worst tornado disasters in the United States. 695 people in the tri-state area of Missouri-Illinois-Indiana are killed. It is the longest-lived and has the longest path of any recorded US tornado.

1950 - The US begins keeping official records about tornadoes.

February 2, 2007 - At least 20 people are killed in Lake and Volusia counties in Florida after at least three tornadoes touch down in the middle of the night.

March 1, 2007 - At least 20 people are killed, one in Missouri, 10 in Alabama, and nine in Georgia from a string of tornadoes. In Alabama, eight of the 10 killed are teenagers from Enterprise High School in Enterprise, Alabama.

April 25-28, 2011 - An outbreak of 201 confirmed tornadoes occurs from 8:00am ET April 25 to 8:00am ET April 28, 2011. There are approximately 321 fatalities in six states during the entire outbreak. The majority of fatalities occur in Alabama, where as many as 243 people are killed. Other states reporting fatalities are Mississippi, Tennessee, Georgia, Virginia and Arkansas. In terms of multi-day outbreaks, this outbreak holds the record for the largest number of tornadoes.

May 22, 2011 - An EF5 tornado strikes Joplin, Missouri, killing at least 158 people. It is the deadliest single US tornado since federal record-keeping began in 1950. The tri-state tornado of 1925 is still the deadliest tornado in US history.

August 3, 2011 - The Storm Prediction Center's final report for April 2011 shows 753 tornadoes touched down across the US, breaking the previous monthly record of 543 tornadoes in May 2003.

January 20-23, 2017 - Twenty people are killed - more than in all of 2016 - after an outbreak of twisters in Georgia and Mississippi. More than 80 tornadoes are reported over three days across Texas, Arkansas, Florida Louisiana, Mississippi, Alabama, Georgia and South Carolina - with more than 60 reported on January 21 alone. according to the National Weather Service.