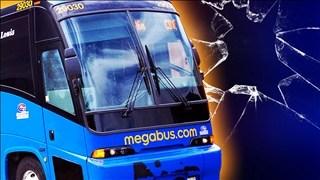 A tour bus crash Thursday in southern Indiana sent at least 20 people to the hospital.

The accident happened 22 miles north of Louisville, Kentucky near Henryville, Indiana on I-65.

The 16 team members and coaching staff on the bus were headed to a competition in Tennessee.

Indiana Governor Mike Pence released a statement Thursday saying, “As law enforcement and emergency personnel respond to this situation, we urge all Hoosiers to hold these men and women in their thoughts and prayers.”

State officials say they do not know the cause of the crash, but do know the driver of the bus swerved to the left side of the road before crossing over both lanes of traffic and overturning.

So far, no fatalities have been reported.