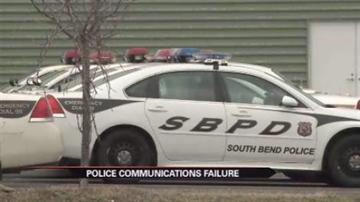 The problem started around 7 p.m. Wednesday when the radios went down because of a problem with the tower for the new 800 Megahertz radios.

"We could hear the cars but maybe sometimes the cars could not hear dispatch and vice versa,” said Gary Horvath, South Bend Police Department Division Chief.

"Around 10 p.m. or 10:30 p.m. it was a decision between the dispatch center and the command officers on the street to actually go back to the backup plan which is actually going back to our old UHF system,” said Horvath.

That meant dozens of police officers had to find their old radios and get them charged and working.

“Unfortunately since it's been almost a year a few of the officers had to figure out where they were,” said Horvath.

As a precaution, officers doubled up.

"The midnight shift was doing priority calls as well as having two officers per cars actually patrolling the streets,” said Horvath.

On Thursday, technology companies determine a tower was the culprit and they worked around the clock to try to resolve the problem.

"The good news is Motorola worked throughout the night and were able to get us at least back to 50-percent capacity,” said Horvath.

Throughout the day officers were still relying on those backup systems for communication!

"So we are actually calling officers before they even showed up to make sure they have the UHF radio which is a great backup system for us,” said Horvath. "Unfortunately technology hasn't progressed much beyond a dedicated circuit between towers between dispatch centers etc. And that is probably if anything the weakest link of any communication system."

The old radio system doesn't allow South Bend officers to communicate with the county or Mishawaka Police if they need to.

Thursday afternoon, the police department asked officers to use their megahertz radios but keep their old radios as backup until further notice.