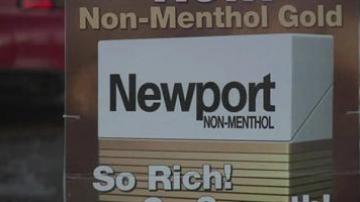 BENTON HARBOR, Mich.-- You can buy cigarettes and alcohol at most convenience stores in Michigan and Indiana. But did you know that advertisements on the outside of convenience stores for these items could actually be encouraging your child to experiment with them much earlier?

That is why the Berrien County Health Department is trying to put a stop to signs like these outside of convenience stores.

Signs like these can be seen at 78 percent of gas station store fronts in Benton Harbor.

They advertise adult products, but according to the Berrien County Health Department, the ones really affected by these signs are your kids.

“40 percent is the risk of a teen smoking. That is increased for every ten tobacco adds that they see”, said Just Health Coordinator Tracy-Ann Jennings.

However not everyone in Benton Harbor agrees with this proposed tobacco and alcohol advertisement ban.

“Advertisements on the store are not going to make our kids smoke. If our kids are going to decide to smoke, they are going to smoke anyway,” said Benton Harbor resident Marion Carouthers.

Carouthers says store owners should be able to decide what they advertise on their own store and he worries that the sign ban could hurt small businesses in the area.

But Jennings says the goal of the initiative is not to hurt revenue for small businesses.

“Adults that frequent stores know what they are going there to buy. They already know what products these stores sell,” said Jennings.

The goal is to target stores kids frequent.

“We are going to look at stores that are close to churches, parks, playgrounds or schools,” said Jennings.

She wants kids in Benton Harbor to live healthier lives and stop being part of a statistic.

“The average age of youth in Berrien County that start smoking is 12-years-old,” said Jennings.

If you would like to learn more about Operation Storefront, you can go to the town hall meeting this Friday at 1 p.m.