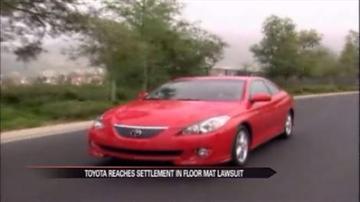 Toyota has announced that it has reached a billion dollar settlement with car owners connected to problems with floor mats in several models.

Drivers said the floor mats were getting stuck causing their vehicles to accelerate.

The settlement will pay for new safety features including a brake override system and compensation.

The company will also set up a fund to pay former Toyota owners who sold their cars at lower prices because of the negative publicity.