Traffic stop leads to seizure of 160 pounds of marijuana 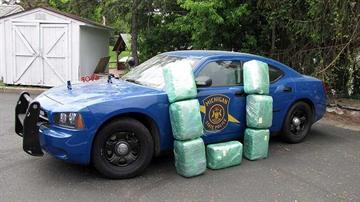 A trooper conducted a traffic stop on a 2006 GMC Yukon at 10:25 a.m. because the driver was weaving out of his lane, according to reports.

During the traffic stop and search of the vehicle, troopers found 160 pounds of marijuana hidden inside duffle bags in the back of the SUV.

The marijuana was packaged in seven bales between 20 and 25 pounds each.

The 36-year-old driver, a resident of Chicago, was arrested and charged with possession with intent to deliver marijuana.

The driver had his 3 year old son in the car at the time of the traffic stop. He was handed over to relatives through Child Protective Services.

The same team of troopers have seized suspected drug money exceeding $250,000 as well as seized a kilogram of heroin valued at over $100,000 – all over the course of the last two weeks.