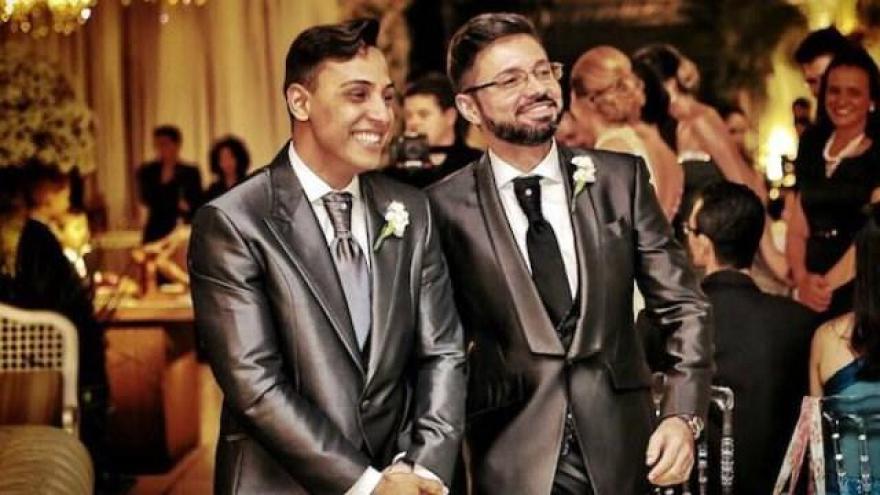 RIO DE JANEIRO (CNN) -- It was a 13-year courtship. But over the weekend, the mayor of the small Brazilian city of Lins finally tied the knot in front of 300 friends and family.

"It wasn't supposed to be a political act," Edgar de Souza said. "It was a ceremony for us. We waited long enough! But of course, it was also political."

That is because Souza was marrying his longtime male partner, Alexsandro Luciano Trindade.

"It's the first time in Brazil that a mayor has starred in his own same-sex marriage!" Souza said with a laugh. "We want to give visibility to gay marriage and encourage others to take advantage of their rights."

He said he has received some hate mail, but mostly messages of support on social media.

Same-sex marriage has been legal in Brazil since 2013 after a decision by the National Council of Justice recognized marriage as a right for same-sex couples across the country. In the first three years, more than 14,000 same-sex couples were married.

Once a bastion of conservative Catholic values, Latin America has become something of a trailblazer for gay rights, with Argentina, Uruguay and Mexico City leading the charge along with Brazil.

Souza became the first openly gay mayoral candidate in Brazil during his first campaign, in 2012. He threw his hat in the ring after three successful terms in the local legislature.

"It was a dirty campaign," he said.

"My rivals said I was going to turn the town hall into a gay nightclub. They put up posters of me with my partner and said I would corrupt families," Souza said.

"But it backfired. The people of Lins rejected the homophobic attacks and I jumped 10% in the polls!