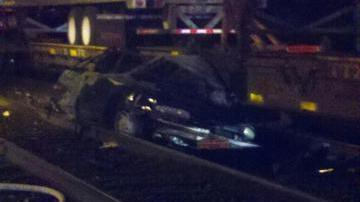 MISHAWAKA, Ind. - A train slammed into a car at the railroad crossing on Main Street in Mishawaka Saturday night.

The accident happened before midnight.

The point of impact was at Main Street, the vehicle was pushed all the way to Church Street.

The car, which was caught on one of the box cars caught fire on the overpass over Church Street.

Church and Main were both closed for over an hour during the investigation, several other roads were also blocked as the train sat on the tracks.

A hazmat team was also called in because of burning magnesium.

Once the car fire was put out, investigators noticed that no one was inside the car.

Officers walked up and down the tracks with flashlights looking for a possible victim - a driver was never located.

Lt. Tim Williams with the Mishawaka Police Department told ABC 57 News that witnesses told them that three guys were seen pushing the car over the tracks. It appeared the car had stalled. Those witnesses said that before the train hit the car they took off running.

The make and model of the car wasn't immediately available.

It took crews a couple of hours to get the scene cleared and the roads back open again.

The crash remains under investigation. If you know or hear information about the gentleman pushing the car on the tracks you're asked to call the Mishawaka Police Department.

ABC 57 News was the only TV news crew on the scene providing real time alerts on Facebook.