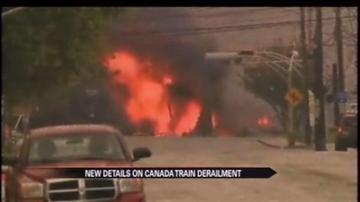 QUEBEC, Canada — At least five are dead with many more deaths expected after a train derailed in Canada. Around 40 people are missing.

A runaway train exploded, spilling crude oil into the town and the nearby river. The train was pulling more than 70 tankers of crude oil.

Police evacuated more than one third of the town.

Firefighters were still working Sunday to extinguish two burning tank cars that were at risk of exploding.