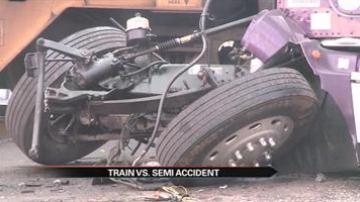 MENTONE, Ind. -- A semi driver is alive after the rig he was driving got stuck on the track and got slammed by an oncoming train.

It happened just before 7 a.m. in Mentone.

Indiana state police told ABC 57 there are signs posted in the area telling trucks not to cross the tracks. Police say the driver ignored that and got stuck.

When he saw the train coming he was able to get out just in time.

On impact police say the semi engine flew out and landed roughly 30 yards away, almost hitting a trailer.

No injuries were reported but the road and cross arms are damaged along with the semi.
Share this article: