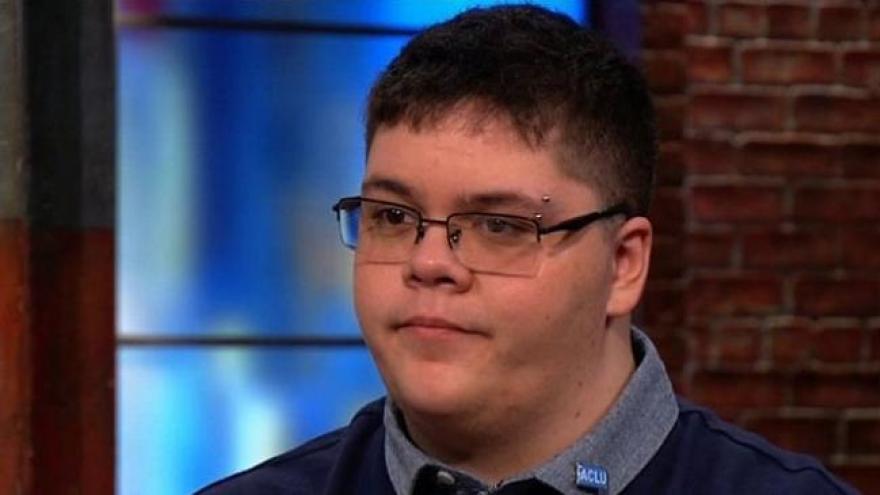 (CNN) -- Gavin Grimm, a 17-year-old transgender student from Virginia, is set to take his case to the nation's highest court.

Speaking Friday with CNN's Alisyn Camerota on "New Day," Grimm said he was frustrated but not daunted by the Trump administration's decision to rescind an Obama-era directive allowing transgender students at public schools to use bathrooms and facilities corresponding with their gender identity.

"It was very frustrating," said Grimm. "I don't think any one was necessarily surprised ... It emboldened us to really ramp our efforts in what we are doing and keep fighting as hard as we always have been."

At issue is whether Grimm can use the bathroom that corresponds to his gender identity, rather than the gender on his birth certificate. He is barred from using the boys' bathroom at his Virginia high school.

Last April, a federal appeals court ruled in favor of Grimm, who fought a school board policy that denied him access to the boys' bathroom but allowed him the use of recently constructed single-stall unisex restrooms.

In siding with Grimm and against the school district, the court deferred to the Obama administration's interpretation of Title IX.

The Gloucester County School Board said it welcomed the Trump administration's withdrawal of the letter at issue in its case.

"This action shows 'due regard for the primary role of the States and local school districts in establishing educational policy.' We look forward to explaining to the Supreme Court why this development underscores that the Board's commonsense restroom and locker room policy is legal under federal law," a lawyer for the school board said Wednesday.

But Grimm and his attorneys are pushing on with the case because they say a central issue needs to be decided. Arguments in the case are scheduled for March 28.

"When it decided to hear Gavin Grimm's case, the Supreme Court said it would decide which interpretation of Title IX is correct, without taking any administration's guidance into consideration. We're confident that that the law is on Gavin's side and he will prevail just as he did in the Fourth Circuit," he said.

While the Trump administration's new interpretation may not stop the case, it could give the justices an easy out, allowing them to send the matter back to the lower court to consider the new guidance. The court could also decide to send the case back before arguments.

For his part, Grimm told CNN he does not believe these protections are a matter of states' rights, but universal rights.

"Civil rights are not state issues," he said, speaking on "New Day." "They are everyone's issues. If you leave civil rights to the states, people will wait extended amount of times to get their rights."