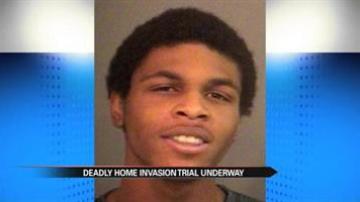 SOUTH BEND, Ind. -- In court, the state began presenting its case against Lee Griffin, who is accused of participating in a violent home invasion that led to the death of Sandra Price.

Griffin is accused of participating with four others in a home invasion in December 2012 where Kent and Sandra Price were stabbed. Sandra later died from her wounds.

In addition to the murder charge, Griffin is charged with burglary and robbery.

Tuesday was the first day of testimony in Griffin's trial.

The jury heard from several witnesses, including the first victim to be attacked during the alleged break in.

The 14-year-old witness was in the kitchen when he heard a knock at the back door.

He also told the jury about the first few moments of the incident and showed them where the first man through the door cut his palms and fingers with a kitchen knife.

He was then taken downstairs where he thinks he was knocked out.

He told the jury that when he came to, one of the burglars pulled out  a gun, cocked it, and told him: don't move or I'll kill you."

The boy followed those orders until police arrived and rescued him.

Griffin is charged with being one of the thieves who broke in, but is not accused of being the one wielding the knife.

He's being tried for murder because he allegedly participated in the felony that eventually led to Sandra Price's death.

The trial could last until Thursday.

Two of the other men accused in this case have pleaded guilty.

Khawana Lamar will be sentenced Friday.