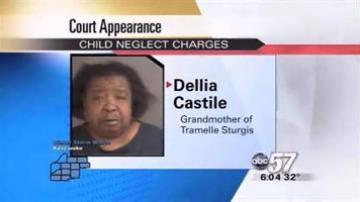 Police believe that Tramelle was murdered by his abusive father.  Dellia Castille, his grandmother, is accused of having done nothing to stop it.

Castille will be back in court on Dec. 6, when the judge will decide her fate.
Her attorney requested that the charges against Castille be either discharged, dismissed, or that she be granted a bond reduction.
Castille is in the St. Joseph County Jail on a $15,000 cash bond.
The judge said Castille must enter a plea by 8 a.m. on Feb. 8.
A trial date has been set for March 19, for both Castille and Sturgis.
Sturgis has been charged with murder.