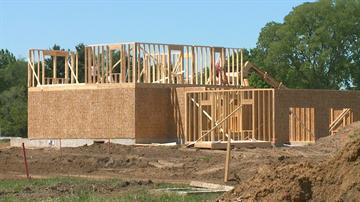 SOUTH BEND, Ind. – You could be Notre Dame’s newest neighbor. The Northeast Neighborhood Revitalization Organization (NNRO) is sponsoring the Triangle Development just south of the university. The final plot will hold 52 single-family homes.

The development borders State Road 23 to the south, Georgiana to the west, Napoleon to the north, and Duey to the east.

Tim Sexton, the Vice President of Public Affairs at Notre Dame and President of the NNRO, said they want to keep the neighborhood diverse.

"70 percent are market rate, 30 percent are low to moderate income and we want to keep diversity in the neighborhood," said Sexton.

He added this is the first time in a long time, for this large of a housing development to come to the area.

"This is the first time in an awful long time where we've had a concentration of 52 homes being built within the city limits," said Sexton.

He said work on the project started back in 2005, and now it’s great to see it start to materialize.

Construction on the first two homes of the project is underway. The first is being framed, and the second home’s basement was poured on Monday.

Some of the homes should even be completed by football season.

"Five homes that are currently going to be under construction in the next few weeks will be part of a parade of homes that will be featured in our community this fall, so these homes will be ready to go right around football season," said Sexton.

With a lot of other developments in the area, he said this will be another great addition to the neighborhood.

"There’s great energy right now with Eddy Street Commons, with this development, the new St. Joseph’s High School is coming in and will be open in August," said Sexton.

Sexton said a big chunk of the lots are already spoken for, but if you want more information contact the South Bend Heritage Foundation.

For more information on the Triangle Development visit its website: http://www.sbheritage.org/Triangle.html.