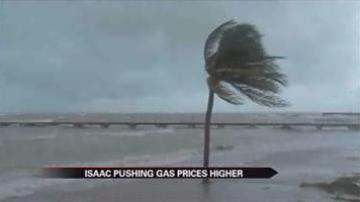 SOUTH BEND, Ind. -- When Malory Pecina filled her car's gas tank up today, it hurt a little more than usual.

"I feel like I'm filling up my gas tank every two days," Pecina said. "And everytime I do it, it gets more and more expensive."

That will hold true until at least next week. That's because Isaac is making its way through the Gulf of Mexico, and as a result, a majority of the nation's oil refinieres have had to shut down.

"Sometimes I forego buying a cup of coffee, so I can get gas for the day," Paige Maclain, a driver, said. "But it all adds up in the end."

Today, an average gallon of gas will cost you around $3.75. In Michiana though, expect prices to be ten to 15 cents hire than that.

"I have to use half my paycheck, or half of what I make in a night, just to fill up my tank," Maclain said. "And most of the time, I don't even fill it up all the way, because I can't."

"It makes me want to drive less," Pecina said.