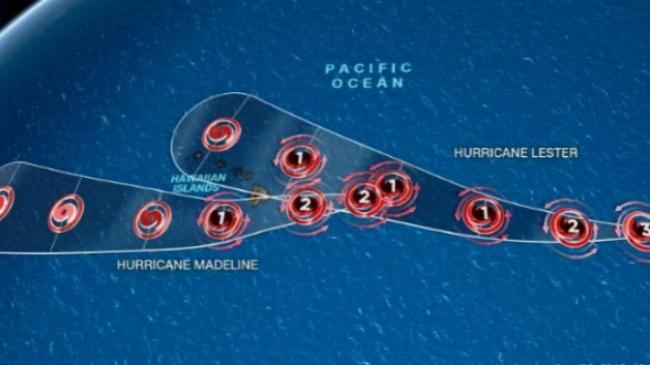 (CNN) -- As we approach the statistical peak of hurricane season in early September, multiple tropical storm systems are threatening the southeastern US and the Hawaiian Islands.

Several could make landfall -- or at least brush the coastline -- later this week, bringing heavy rains and possible flooding.

Two storms are spinning off the Carolinas and in the Gulf of Mexico, currently designated Tropical Depression Eight and Nine, respectively. Both are expected to become tropical storms at any time, and when they do, they'll get the names "Hermine" and "Ian." (Whichever system first reaches tropical-storm strength -- winds at 39 mph or greater -- will become Hermine.)

A video taken from the International Space Station on Tuesday captured all three systems, as seen from orbit.

Here's a breakdown of what storms are coming in the near future.

This one is the most immediate threat to US soil, as it is churning less than 100 miles from the Outer Banks of North Carolina. We are monitoring it closely as its impacts are already being felt, but its proximity to land limits the storm's ability to strengthen significantly. As a result, we believe the impact of this tropical depression will be limited, even if it does become a tropical storm on Tuesday as expected.

The storm should pass within 50 miles of the Outer Banks by Wednesday morning before being kicked back out to sea by an approaching cold front. Heavy rainfall and tropical storm-force winds should stay contained to the Carolina coastline.

But the rip-current threat extends from North Carolina all the way to Florida and should not be underestimated by swimmers enjoying the last unofficial week of summer before the Labor Day holiday.

This storm, which has now emerged in the Gulf of Mexico, could be the bigger threat to the Southeast this week. Any system that lingers in the Gulf in August or September will draw a long, watchful eye from forecasters and emergency planners, and Tropical Depression Nine is no different.

Water temperatures in the Gulf are plenty warm enough to support hurricane development, and the Gulf Coast is full of vulnerable population centers from Tampa to Texas. The forecast calls for the weather system to drift towards the north and west through Tuesday and Wednesday while gaining strength and becoming a tropical storm in the process.

The National Hurricane Center has issued a hurricane watch for Florida from Anclote River to Indian Pass. A tropical storm watch is in effect from Indian Pass to the Walton/Bay County line. A watch means that hurricane/tropical storm conditions are possible within 48 hours.

Fortunately an advancing trough over the central and southern U.S. will kick the system to the east before it has a chance to strengthen much further, most likely leading to a landfall somewhere in the Big Bend area of Florida on Thursday. This would be a good thing, as that part of Florida is sparsely populated and can handle an advancing tropical storm.

If the storm lingers in the Gulf, however, and is allowed to drift north and west, it could make landfall in the more populated Florida panhandle and would have a little extra time to strengthen as well.

In addition to the wind and rough seas associated with tropical storms, heavy rainfall could also be a major threat from this system. Rainfall amounts of 5-10 inches are possible over the Florida peninsula through Friday morning and isolated totals could reach 15 inches, according the the National Hurricane Center. CNN Meteorologist Chad Myers warns that "these types of rain totals, especially when they fall in just a few hours, could lead to flooding similar to what we saw in Louisiana just a few weeks ago."

The Central Pacific Hurricane Center in Honolulu is tracking Hurricane Madeline, now located about 400 miles east of the Big Island of Hawaii. The powerful storm is packing winds of 125 mph, a category 3, but a combination of cooler ocean waters and increased wind shear should weaken the storm to a category 1 or 2 by Wednesday.

The official track predicts the center of Madeline will pass just south of Hawaii, although some models still expect a landfall late Wednesday on the Big Island. Whether the storm makes landfall or not, hurricane-force winds and very heavy rainfall are likely. Therefore, the Central Pacific Hurricane Center has issued a hurricane warning for the Big Island, and a tropical storm watch for the islands of Maui Molokai and Lanai. Given the elevated terrain of the islands, the rainfall, which could reach 12 inches, may cause dangerous mudslides and flash flooding.

Hawaii residents cannot let their guard down after Madeline moves through, however, as Hurricane Lester is fast on its heels. Lester, also a category 3 storm, is expected to approach the Hawaiian islands this weekend. The forecast currently calls for Lester to miss the islands directly, pushing just to the north, but the entire island chain is still in the forecast "cone of uncertainty."

Hawaii frequently has storms approach the islands but rarely deals with hurricane landfalls directly. In fact, only two hurricanes have made landfall in Hawaii since 1950, and none have hit the Big Island. In 2014, Hurricane Iselle weakened to a tropical storm 12 hours before making landfall on the southern portion of the Big Island.

But recent studies have shown that hurricanes may become more frequent in Hawaii thanks to climate change, a pattern we have certainly seen over the past couple of years. El Nino also has played a role in the recent uptick of storm activity there.