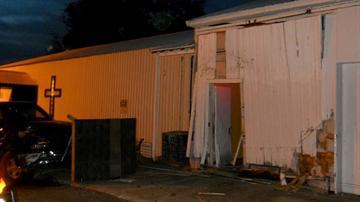 According to the Van Buren County Sheriff’s Department, deputies were called to the area of Depot and Cottage streets after a neighbor reported a pickup truck had just crashed into the church.

When deputies and troopers with the Michigan State Police arrived, they discovered the church building was damaged when a 2000 Chevy Silverado truck crashed into it.

The driver of the truck was not at the scene.

Officers obtained the name of the registered owner of the truck, Jason Ketchum, and went to his home.

Ketchum was arrested and charged with operating while intoxicated and failing to stop and identify at the scene of a crash.

Ketchum was arraigned Friday and released on his own recognizance. His next court date is June 25th.