Trump aims to unite against terrorism in speech before Muslim leaders 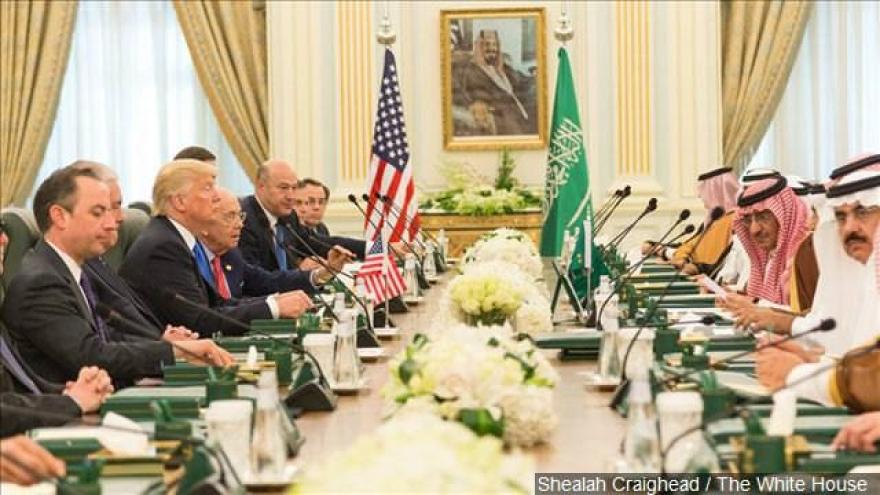 RIYADH, Saudi Arabia (CNN) -- President Donald Trump on Sunday will look to make clear that the United States is not at war with Islam in a major speech here on Sunday, instead defining the battle against terrorist groups as a "battle between good and evil."

In a departure from the Islamophobic rhetoric he sometimes deployed on the campaign trail, Trump will speak out against the militant, political ideology of "Islamist extremism," according to excerpts of the speech released by the White House. Trump's expected use of that term -- rather than "radical Islam" -- will send signals in this region that Trump is putting distance between Islam and the ideology that fuels terrorist groups like ISIS.

"We can only overcome this evil if the forces of good are united and strong -- and if everyone in this room does their fair share and fulfills their part of the burden," Trump is expected to say.

He will say that Middle Eastern countries "cannot wait for American power," but must instead "decide what kind of future they want for themselves, for their countries, and for their children."

The President's speech is expected to help him reset his relationship with the Muslim world after he made a slew of Islamophobic remarks on the campaign trail and called for a ban on Muslims entering the United States during the campaign.

Trump has sought to accelerate the fight against ISIS in Iraq and Syria and his outreach signals that Trump understands he needs a more constructive relationship with Muslim countries, particularly those in the Middle East, if he hopes to succeed in his stated goal of destroying ISIS and other terrorist groups.

The major speech, which Trump will deliver Sunday during an Arab-Islamic-American summit in Riyadh to leaders of more than 50 Muslim countries, will mark Trump's first effort to reach out to the world's 1.6 billion Muslims worldwide.

Trump is expected to say that he hopes to assemble "a coalition of nations who share the aim of stamping out extremism."

"Every time a terrorist murders an innocent person, and falsely invokes the name of God, it should be an insult to every person of faith," Trump will say. "That means honestly confronting the crisis of Islamist extremism and the Islamist terror groups it inspires."

Delivering the speech here in Saudi Arabia, which is home to Islam's two holiest sites, Trump will look to push past his campaign rhetoric -- including a statement in March 2016 that "Islam hates us" -- but will still be dogged by the efforts his administration continues to carry out.

But even as he addresses the Muslim world on Sunday, his administration is continuing to defend the executive order Trump signed to bar visitors from six Muslim-majority countries, which was blocked in US federal court amid criticism that the order is Trump's attempt to fulfill his campaign promise to ban Muslims from the US.

H.R. McMaster, the President's national security adviser, said the address will be an "inspiring, yet direct speech on the need to confront radical ideology and his hopes for a peaceful vision of Islam to dominate across the world."

Those listening to the President's speech on Sunday will also have to contend with the rhetoric of Trump's campaign, which experts say has exacerbated anti-Muslim sentiment.

During his campaign, Trump called for a "total and complete shutdown of Muslims entering the United States," floated the possibility of creating a database of Muslims in the US and called for surveillance of US mosques.

Saudi Foreign Minister Adel Al-Jubeir said the Saudi kingdom, which agreed to host Trump's attempt at a reset with the Muslim world, praised Trump for his plans to deliver the speech and expressed optimism at the content.