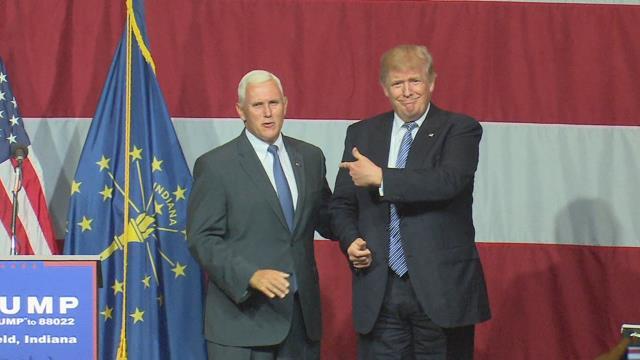 Donald Trump announced on Twitter Friday morning that he has chosen Indiana Governor Mike Pence as his running mate.

I am pleased to announce that I have chosen Governor Mike Pence as my Vice Presidential running mate. News conference tomorrow at 11:00 A.M.

It had already been confirmed by the IndyStar, CNN, ABC News and multiple media outlets on Thursday.

Mike Pence is a great choice and will make an excellent vice president.
Governor Pence is a proven leader with both executive and legislative experience. As Indiana’s governor, he has continued our state’s remarkable economic progress and pushed for more effective, efficient government. He’s served in leadership in Congress and understands how the federal government operates. Governor Pence’s communications skills, long history as a conservative leader and Midwestern common-sense will be an asset to the Trump campaign.
Most importantly, Mike and Karen are people of integrity with hearts for public service. I congratulate both of them on this high honor.

Hillary for America released the following statement, video and post on The Briefing in response to the announcement that Donald Trump is choosing Mike Pence to be his running mate:

By picking Mike Pence as his running mate, Donald Trump has doubled down on some of his most disturbing beliefs by choosing an incredibly divisive and unpopular running mate known for supporting discriminatory politics and failed economic policies that favor millionaires and corporations over working families, said John Podesta, chair of Hillary for America.

Pence is the most extreme pick in a generation and was one of the earliest advocates for the Tea Party.  He was the first of GOP leadership to join Michele Bachmann’s Tea Party Caucus.  As governor, Pence personally spearheaded an anti-LGBT law that legalized discrimination against the LGBT community, alienated businesses, caused boycotts, lost investments and embarrassed Hoosiers-- a law he was later forced to revise. Pence also personally led the fight to defund Planned Parenthood while serving in the House and fought to pass Indiana's 2016 anti-abortion law, with some of the most outrageous restrictions in the country that threatened women’s privacy and limited their choice. And just like Trump, he’s been a long-time opponent of comprehensive immigration reform.

Pence has been no economic leader or friend to the American worker.  In fact, he wants to get rid of the very wages that make the middle class possible.  Pence opposes raising the federal minimum wage and signed a law allowing skilled workers in Indiana to be paid less. Under his failed leadership, the incomes of Hoosiers have stalled at 38th in the nation.

Voters deserve better than more of their divisive policies and ‘me-first’ economic proposals. This new Trump-Pence ticket stands in dramatic contrast to Hillary Clinton’s vision of our future - one where we are stronger together, where unity prevails over division and the economy works for all Americans, not just those at the top.

I’d like to sincerely congratulate Governor Pence on being selected to join this outstanding ticket. The experience Pence brings to the table cannot be understated. He has been a proven leader in every role he’s taken on, and will prove to be an asset for the Trump campaign. This is going to be a formidable ticket that brings strong leadership and provides a sharp contrast to Hillary Clinton’s plans for more of the same failed policies. With the selection of Governor Pence, I feel even more confident that we’ll turn Michigan red in November.

John Gregg, Democratic candidate for governor, issued the following statement today reacting to the news that Gov. Mike Pence will seek the Republican nomination for Vice President and drop his bid for re-election.

This campaign has always been about Indiana’s future and who is best equipped to clean up the mess Mike Pence made. I look forward to hearing from my opponents if they’ll continue his damaging policies or join me working to correct them. In the meantime, I’ll continue outlining my plans for creating and retaining high-paying jobs, strengthening schools, fixing long neglected infrastructure, combating the state’s drug epidemic and all the other very real challenges facing Hoosiers which have taken a back seat to Mike Pence’s personal ambition and extreme ideologies for so long.

With Mike Pence exiting the governor’s race, Democratic candidate John Gregg is in stronger position than ever to win in November, said DGA communications director Jared Leopold. Republicans now face an open-seat race with a candidate who is virtually unknown by Hoosier voters. Whoever emerges from the Republican committee will be hamstrung by Pence’s disastrous record. We look forward to hearing how the Republican replacement will bring any change from Pence’s failed legacy of job losses, economic stagnation and the job-killing RFRA law.
Mike Pence can now live out his dream of ditching Indiana for Donald Trump. Governor Pence’s economic failure and obsession with social issues has been a disaster for Indiana and will be a drag on the Trump ticket. The American people will soon learn what Hoosier voters already know: Mike Pence would rather fight culture wars than focus on the economy.

Mike Pence has spent the past three years focused only on his personal ambition. He has embarrassed Hoosiers, signed divisive and discriminatory legislation into law, and alienated the business community –costing our state money in the process. Unfortunately, that qualifies him as a compatible running mate for Donald Trump, who is out only for himself and running one of the most toxic presidential campaigns in history.
As he crisscrosses the country promoting Donald Trump, Mike Pence will need to account for his failed record as our governor. This includes the discriminatory RFRA that has cost our economy over $60 million, an anti-abortion law with some of the most outrageous restrictions in the country, and a lagging state economy that is underperforming the national average and our closest neighboring states.

Indiana State AFL-CIO President Brett Voorhies made the following comments on the announcement that Mike Pence will be forfeiting his governorship to run alongside GOP nominee Donald Trump:

Mike Pence is running away from the people of Indiana and into the arms of Donald Trump, and the pair could not be more perfect for each other. Trump and Pence are both driven by a divisive political agenda that focuses more on ideologies than actual practical solutions to the issues plaguing working people. Governor Pence has failed Hoosiers, so it’s no wonder he’s made such a desperate attempt to escape the governor’s race. Luckily, we have a leader in this race who is not running away. John Gregg has the experience needed to pick up the pieces and clean up the mess Mike Pence has left behind. John Gregg still stands with working Hoosiers just as he always has. Now it is up to the people of Indiana to decide whether they want to elect a leader who has stood by them or someone who will follow in the footsteps of Mike Pence. Let’s open a new chapter for the working families of Indiana and elect John Gregg as our next governor.
Mike Pence has waged repeated attacks on working Hoosiers as governor and will without a doubt continue the attacks alongside his anti-worker running mate Donald Trump who is "100 percent right to work". Though it is a relief to see Pence exit the governor's race in Indiana, we still must work to defeat him in November from becoming the next vice president of the United States.