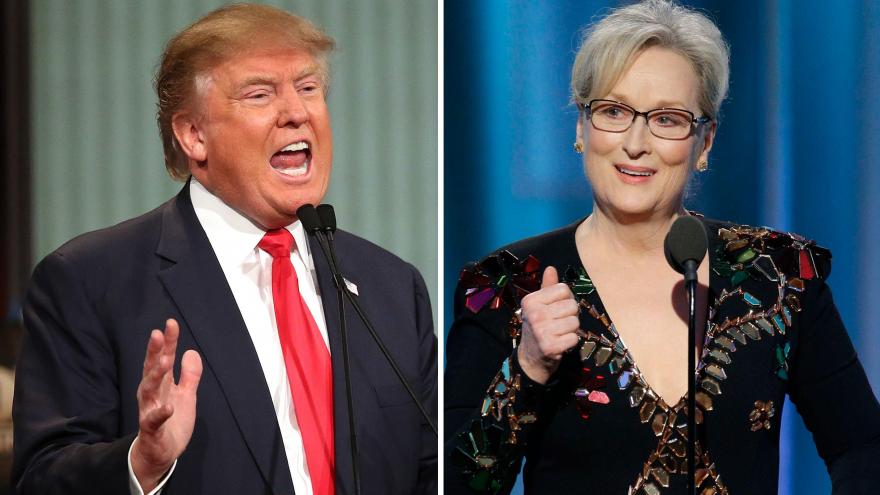 NEW YORK (CNNMoney) -- Meryl Streep never mentioned President-elect Donald Trump by name during her six-minute condemnation at the Golden Globes. He had no problem going after her directly.

In a series of tweets before dawn Monday, he called Streep, who has more Academy Award nominations than any other actor in history, "one of the most overrated actresses in Hollywood."

Meryl Streep, one of the most over-rated actresses in Hollywood, doesn't know me but attacked last night at the Golden Globes. She is a.....

"She is a Hillary flunky who lost big," Trump said.

Hillary flunky who lost big. For the 100th time, I never "mocked" a disabled reporter (would never do that) but simply showed him.......

At the Golden Globes on Sunday night, Streep used an acceptance speech for a lifetime achievement award to take Trump to task. Without naming him, she spoke out against disrespect and violence, and called for the protection of journalists.

She specifically called out Trump's 2015 mocking of a reporter with a disability.

"It was that moment when the person asking to sit in the most respected seat in our country imitated a disabled reporter," she said. "Someone he outranked in privilege, power and the capacity to fight back."

Trump claimed on Monday, as he has in the past, that he never mocked the reporter, Serge Kovaleski of The New York Times. Video shows he did, flailing his arms in imitation: "You gotta see this guy."

"For the 100th time, I never 'mocked' a disabled reporter (would never do that) but simply showed him "groveling" when he totally changed a 16 year old story that he had written in order to make me look bad.," Trump tweeted. "Just more very dishonest media!"

"groveling" when he totally changed a 16 year old story that he had written in order to make me look bad. Just more very dishonest media!

At a November 2015 campaign rally, Trump imitated Kovaleski, whose disability affects his movements. At issue was Trump's insistence that he had seen "thousands and thousands of people" celebrating the Sept. 11 attacks.

Kovaleski had written about early reports that authorities were looking into reports of "a number of people" seen celebrating. No proof was ever established of Trump's claim.