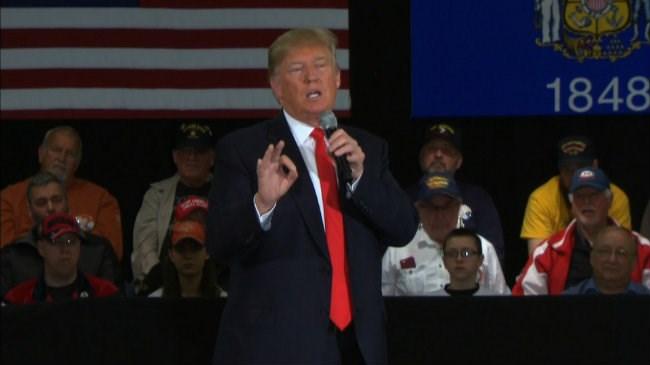 (CNN) -- Hillary Clinton leads in the polls nationally and in key battleground states, but the flood of stories regarding her private email server and donations to the Clinton Foundation demonstrate the former secretary of state won't be able to completely outrun voter skepticism -- or Donald Trump.

Trump went on offense Monday, using the bulk of a speech in Akron, Ohio, to attack Clinton.

"No issue better illustrates how corrupt my opponent is than her pay for play scandals as secretary of state," Trump said.

"I've become increasingly shocked by the vast scope of Hillary Clinton's criminality. It's criminality. Everybody knows it," he said as the crowd erupted in a sea of "Lock her up!" chants.

"The amounts involved, the favors done and the significant numbers of times it was done require an expedited investigation by a special prosecutor immediately, immediately, immediately," Trump said. "After the FBI and Department of Justice whitewash of the Clinton email crimes, they certainly cannot be trusted to quickly or impartially investigate Hillary Clinton's new crimes, which happen all the time."

For Trump, the controversies are a welcome opportunity to push the idea that Clinton is part of the Washington establishment and can't be trusted to shun special interests. A Washington Post/ABC News poll from earlier this month showed that 59% of voters believe that Clinton is not honest and trustworthy. (That same poll that 62% believe Trump is not trustworthy.)

Trump bluntly argued that Clinton's actions at the State Department amounted to corruption, even suggesting Clinton was at the center of a racketeering scheme.

It's a good time for Trump to go on offense against Clinton. She is spending most of the week fundraising, with several high-dollar events in California. His campaign is also keen on reminding people that Clinton hasn't had a press conference in months -- and therefore hasn't had to answer repeated questions on each new development.

Trump's attacks aside, stories emerging over the past few days from a federal courtroom, Capitol Hill and an event on Long Island show it doesn't take much to get the issue of Clinton's emails and the Clinton Foundation back into the news cycle.

Clinton got some bad news from a federal judge Monday, who gave the State Department until September 23 to determine a plan on how to release nearly 15,000 documents the FBI had obtained as part of its investigation into her private email server -- possibly creating a timeline where thousands of emails could be made public right before Election Day.

Trump's focus on Clinton may help take the spotlight off of himself ever so slightly. Having restructured his campaign team last week, Trump was expected to deliver a speech later this week outlining his immigration policy. But that speech has been delayed, a campaign source said.

So the campaign turned its attention on Clinton, the Clinton Foundation and her emails. That was readily apparent Monday, as both Trump and vice presidential nominee Mike Pence brought up the issue.

"It's time for Hillary Clinton to come clean about the Clinton Foundation," Pence said at a rally in Cedar Rapids, Iowa.

The Clinton Foundation last week accounced it would ban donations to from corporations and foreign countries if Hillary Clinton is elected. Pence rhetorically asked why there wasn't a conflict of interest when she was Secretary of State.

Hillary Clinton's campaign chairman, John Podesta, accused Trump of using the issue to hide from his own problems.

"The Foundation has already laid out the unprecedented steps the charity will take if Hillary Clinton becomes president. Donald Trump needs to come clean with voters about his complex network of for-profit businesses that are hundreds of millions of dollars in debt to big banks, including the state-owned Bank of China, and other business groups with ties to the Kremlin," Podesta said.

This isn't the first time Trump has brought up the foundation or emails, but a previous attack didn't end up going well. A suggestion that Russian hackers search for Clinton's 33,000 missing emails led to questions about whether he would be committing treason by asking foreign agents to hack a US presidential candidate.

As questions mount about the activities and future of the foundation, former President Bill Clinton announced major changes that would be implemented should Hillary Clinton win the White House.

Bill Clinton will curtail his direct involvement in the charity and the group will transition some programs to like-minded charities, he said in a statement on the foundation's website Monday. Clinton last week also said he would stop giving paid speeches.

"Over the last several months, members of the Foundation's senior leadership, Chelsea, and I have evaluated how the Foundation should operate if Hillary is elected," the former president wrote. "Throughout the process, our top priorities have been preserving our most important programs, supporting the people who work for the Foundation and its affiliated programs, and resolving legitimate conflict of interest questions."

A spokesman for the Clinton Foundation pointed to the new post from the former president when asked about Trump's comments.

Bill Clinton also announced last week that the Clinton Global Initiatives meeting of high-dollar donors, celebrities and foreign leaders next month would be its last.

The Clinton Foundation has raised money in the years since Bill Clinton left the White House and has launched a host of charitable efforts targeting climate change, improving quality of life for women and girls in developing countries and fighting health crises.

The charitable foundation has been scrutinized throughout Hillary Clinton's presidential bid, but the organization has faced greater scrutiny since emails were newly uncovered showing a top Clinton Foundation donor seeking access to a top diplomat when Clinton was secretary of state.

Judicial Watch President Tom Fitton said Monday that the new exchange, and others, showed donors buying access to the secretary of state through the foundation. But none of the exchanges appeared to show a direct quid pro quo.

"No matter how this group tries to mischaracterize these documents, the fact remains that Hillary Clinton never took action as Secretary of State because of donations to the Clinton Foundation," Clinton campaign spokesman Josh Schwerin said about the newest emails.

And on Long Island, Former Secretary of State Colin Powell pushed back on suggestions that he may have given Clinton the idea to use a private email account, telling media outlets that "her people are trying to pin it on me."

"The truth is, she was using (the private email server) for a year before I sent her a memo telling her what I did," Powell said Saturday in East Hampton, New York, People magazine and the New York Post reported.