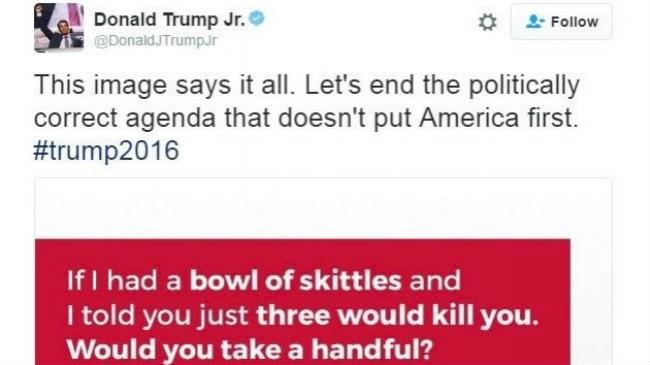 WASHINGTON (CNN) -- Donald Trump's campaign on Tuesday stood by a controversial tweet issued by the candidate's son, Donald Trump Jr., in which he likened Syrian refugees to a bowl of Skittles.

On Monday, Trump Jr. tweeted a graphic that likened Syrian refugees to Skittles, which swiftly triggered a wave of criticism.

"This image says it all. Let's end the politically correct agenda that doesn't put America first. #trump2016," he tweeted, with a graphic that said: "If I had a bowl of skittles and I told you just three would kill you. Would you take a handful? That's our Syrian refugee problem."

The graphic had an official Trump logo that the Republican nominee shares with his running mate, Mike Pence.

Despite widespread condemnation, the campaign stood by the tweet and in a statement called Trump Jr. "a tremendous asset to the campaign."

"America has become less safe under Hillary Clinton and Barack Obama, and Clinton's planned 550% increase in Syrian refugees is a dangerous proposal that will put American lives at risk," said senior communication adviser Jason Miller. "Speaking the truth might upset those who would rather be politically correct than safe, but the American people want a change, and only Donald Trump will do what's needed to protect us."

"What we do know is that many Americans are concerned with the lack of vetting that's going on. We see what's happening all across Europe ... that has been a disaster," she said Tuesday on "Erin Burnett OutFront."

But Mars Candy, which produces Skittles, said in a statement, "Skittles are candy. Refugees are people. We don't feel it's an appropriate analogy. We respectfully refrain from further commentary as anything we say could be misinterpreted as marketing."

The graphic's language apparently wasn't a Trump Jr. original, but instead that of former Illinois Rep. Joe Walsh, a former tea party congressman from Illinois and now a conservative talk radio host.

The 2016 campaign has featured heated rhetoric around US policy for accepting refugees. Clinton has called for an increase in the number of Syrian refugees the US should accept and Trump has called for "extreme vetting" of immigrants, as well as a ban on immigrants from countries that are hotbeds of terrorism, such as Syria.

One of President Barack Obama's former speechwriters responded to Trump Jr. with a link to CNN reporting about a little boy in Aleppo, Syria, who became the face of the humanitarian crises in Syria.

"Hey @DonaldJTrumpJr, this is one of the millions of children you compared to a poisoned Skittle today," Jon Favreau tweeted.

Musician John Legend, who has been an outspoken critic of Trump on Twitter, wrote: "There's a tiny chance that anyone could be a murderer. Get rid of everyone now!!! #trumplogic"

Legend also retweeted a photo of the Aleppo boy, where someone said: "This is not a skittle."

And former CIA director James Woolsey, a senior adviser to the Trump campaign, told CNN's Kate Bolduan and John Berman during "At This Hour" that it was a "clumsy analogy" that "doesn't help" the Trump campaign.

"But he's not the one running for president," Woolsey added.

Last week, Trump Jr. was criticized for making a "gas chamber" reference when complaining about how the treatment his father has received form the media compared to the coverage from Clinton.

"They've let her slide on every discrepancy, on every lie, on every DNC game trying to get Bernie Sanders out of the thing," he said. "I mean, if Republicans were doing that, they'd be warming up the gas chamber right now. It's a very different system -- there's nothing fair about it."

CORRECTION: A previous version of this story wrongly identified the state Joe Walsh represented in Congress and misattributed a quote to him. Walsh is a former Illinois congressman. It was Joe Wilson of South Carolina who shouted "you lie" at President Barack Obama.