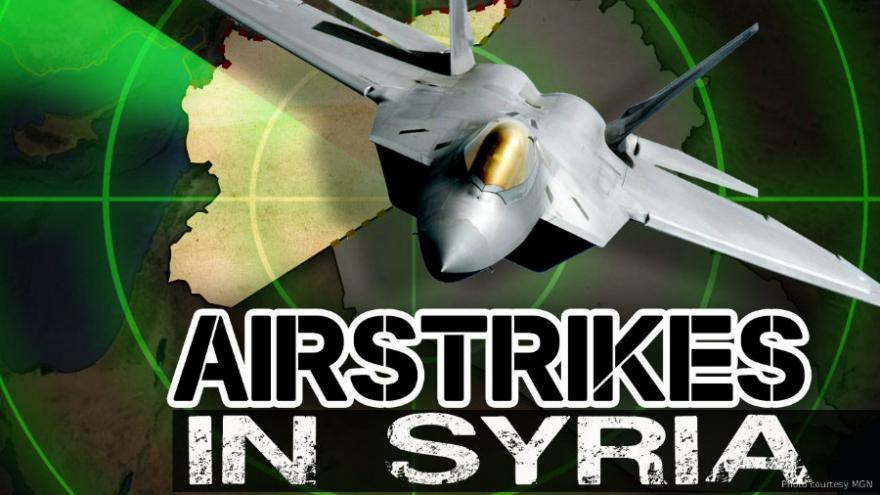 "A perfectly executed strike last night," Trump tweeted Saturday. "Thank you to France and the United Kingdom for their wisdom and the power of their fine Military. Could not have had a better result. Mission Accomplished!"

"Last night, operations were very successful," Pentagon spokesperson Dana White said at a briefing Saturday morning. "We met our objectives. We hit the sites, the heart of the chem-weapons program. So it was mission accomplished."

"I think the President's expressions this morning were a strong affirmation that the mission that he gave our military to go in and destroy key elements of the chemical weapons infrastructure in Syria was completely and professionally and swiftly accomplished," said Pence, who was on a foreign trip to Peru for the Summit of the Americas.

And, like Pence, US Ambassador to the United Nations Nikki Haley emphasized that the United States is ready to keep pressure on Syria following military strikes that targeted the country's ability to use chemical weapons.

"I am not saying that the attacks last night solved all problems, but compared to the alternative -- to do nothing -- it was the right thing to," the alliance's secretary general, Jens Stoltenberg, told reporters in Brussels on Saturday.

The Russian ambassador to the UN Vassily Nebenzia, meanwhile, said Washington had embarked on an "illegal military venture."

"Russia condemns in the strongest possible terms the attack against Syria where Russian military personnel are assisting the legitimate country and their counterterrorism efforts," Nebenzia said, reading a statement from Russian President Vladimir Putin.

Nebenzia also said recent inspections by the UN's Organization for the Prohibition of Chemical Weapons found no "traces of activity that would contravene the chemical weapons convention" at scientific research facilities targeted in the strikes.

"The scientific facilities in Syria are used only for peaceful activity which is aimed at enhancing the economic effectiveness of economic activity of Syria," Nebenzia said.

Before the US launched its missile attack, international observers with the UN group had yet to reach the Damascus suburb of Douma, where the deadly attack took place. Experts arrived Saturday, the chemical weapons watchdog said on Twitter.

Pence said the US and its allies went into the effort "absolutely confident that the Syrian regime had conducted this attack, despite what some of their apologists around the world are saying, and high confidence that at minimum the chemical weapon of chlorine was used in this attack."

A senior administration official told reporters that the US has assessed that both sarin and chlorine were used in the chemical attack last weekend.

"We do have significant information that also points to sarin use," the official said, citing symptoms described in reporting from media, non-governmental organizations and other open sources.

Trump announced from the White House on Friday night that the US, in coordination with France and the United Kingdom, had launched strikes on Syria following a week of threats of retaliation for an alleged chemical weapons attack on civilians by the Assad regime. The strikes were launched at 9 p.m. ET, the early hours of Saturday morning for Europe and the Middle East.

Trump's remarks on Twitter Saturday are reminiscent of President George W. Bush's 2003 speech announcing an end to major combat operations in Iraq on the aircraft carrier USS Abraham Lincoln, with a big sign that read, "Mission Accomplished" in the backdrop. Those words later took on an irony as the war dragged on, and at the end of his presidency, Bush called the use of the phrase "a mistake."

Trump had said Friday that the US is "prepared to sustain this response until the Syrian regime stops its use of prohibited chemical agents."

But US Defense Secretary James Mattis told reporters Friday that the missiles were a "one-time shot" for now, and that the strike sent a "strong message" to "deter" Assad from carrying out another chemical attack.

"Clearly the Assad regime did not get the message last year. This time our allies and we have struck harder," Mattis said.

The Pentagon repeated Saturday that the President has the authority under the Constitution to defend US interests, but what happens next is up to the Assad regime and Russia. The US mission in Syria remains to defeat ISIS and not get involved in the country's civil war, White said.

A total of 105 missiles were launched in the strikes, according to the Pentagon. The strikes "successfully hit every target" and the allies "took every measure and caution" to only hit the intended targets, White said Saturday morning.

The Pentagon also said that it was not aware of any civilian causalities at the time.

Syria state TV, however, claimed that three civilians were wounded in Homs after "several" missiles were intercepted by Syrian air-defense systems.

Lt. Gen. Kenneth McKenzie, director of the Joint Staff, said that none of the aircraft or missiles involved in this operation were successfully engaged by Syrian air defenses, and there is no indication that Russia air defense systems were employed.

Syrian armed forces said in a statement, however, that the country's defense systems "intercepted most of the missiles, but some hit targets including the Research Center in Barzeh," a suburb of Damascus.

Russian Army Colonel Gen. Sergey Rudskoy put a number to the claim, telling reporters that 71 of the cruise missiles were intercepted by Syria's air defense systems.

"It proves high efficiency of the Syrian armament and professional skills of the Syrian servicemen trained by the Russian specialists," Rudskoy said at a Ministry of Defense media briefing. "Over the last 18 months, Russia has completely recovered the Syrian air defense systems, and continues its development."

The Pentagon assessed that nerve agents were present in the Barzah research center and that the Syrian regime employed about 40 surface-to-air missiles, but those launches occurred after the last impact of the US and its allies' strike.

White also said Russia has begun a disinformation campaign on the situation.

"There has been a 2000 percent increase in Russian trolls in the last 24 hours," White said. "Therefore, we will keep you all abreast of the facts moving forward."

Defense Secretary James Mattis said Friday night that the US was expecting a disinformation campaign by those aligned with the Assad regime.